Poor Ghanaian Men Don’t Cheat, Only The Rich Does – Fisherman 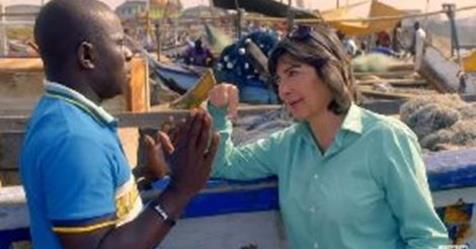 Chief International Correspondent for CNN, Christiane Amanpour flew to Ghana to conduct interviews on the topic ‘Sex and Love Around the World’.

She’s interviewed some Ghanaians about the topic to get their divergent views on it.

In one of the episodes she landed in James Town, a fishing community in Accra. There she spoke to a young man believed to be in his mid-forties on ‘Is cheating a rich man’s game?”.

However, the young man who doubles as a footballer and fisherman said he believes only rich men cheat on their wives. This according to him is because they have the mean and can afford to have mistress’ aside their wives.

“I don’t cheat on my wife because I’m poor”. He answered, when quizzed whether he cheats on his wife or not.

“So this is rather interesting, you did say that you don’t cheat because you are a poor person, would you say that the people who cheat are mostly the rich people who can afford to have a wife and a mistress and a girlfriend”, she asked.

“Because of their money, when you are rich you can decide to choose any woman you want, but I am a poor person I have to stay with one lady”, he said.

According to her, the root of all these is because Ghana’s economy very bad.

“[In] Ghana, our economy is in such a way that you just need someone to take care of you.

“You can’t make enough money as a woman here because even if you want to get an apartment, in Ghana you pay two years in advance and I just started working, where will I get money to pay for an apartment for two years,” she told Amanpour in an interview.

Cardi B confirm she’s coming to Ghana in December