Ghana is not longer a safe haven for anyone anymore. People now live in fear of being robbed, attacked, killed, kidnapped among other atrocities on daily basis.

Robbers now have diverse means of attacking their victims even in broad day light and they mostly go scot free after committing their atrocities.

They end up killing or injuring many even after getting what they want and for those are lucky enough to go free, they begin to live in fear as the memory keeps haunting them.

One of such people who was recently attacked is Dancehall act, Shatta Wale’s manager, Julio Cyriaano.

According to Julio, he was robbed at gun point on Thursday.

He further explained the robbery took place at around 2:00am when he was asleep together with his family.

The robbers were five in number and were all armed, they drove off with Julio’s car.

He announced the unfortunate incident on his Facebook timeline.

He was however thankful that the robbers did not harm neither him nor any of his family members.

Julio and Shatta Wale have been friends for a very long time, hence his decision to make him (Julio) his new manager. 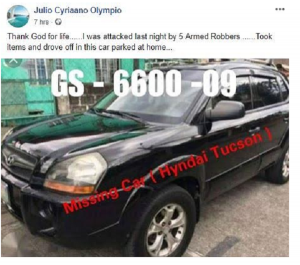