¨Love is my weakness, impatience is my flaw¨ Betty Kyallo spills 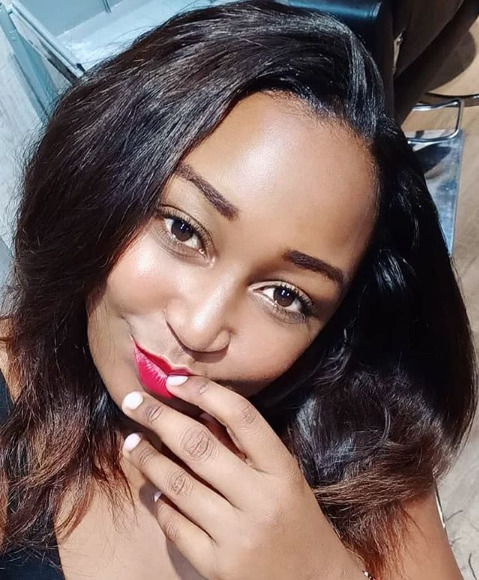 Sassy TV presenter, Betty Kyallo is one known to bash off the critics and walk away like nothing really happened. One so full of life, despite the negative energy, and always living life by her rules.

The beauty recently engaged her online fans in a Q&A session where she spoke a bunch about herself.

First, she articulated she will be turning 31 come the 15th of March. Second, she opened up about her spirited personality and its origin, admitting that being ´Kamba´ is the secret. 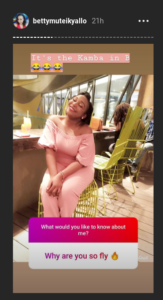 Third was obviously how flawless she appears in her photos, only to reveal, that the way she maintains her ´lat tummy´ in those photos is:

I squeeze it in! 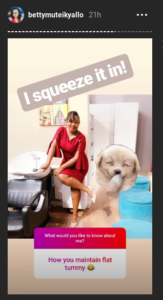 Asked what else she would eye for if not the media, she admitted ¨probably comedy! I think I have a funny bone💯💯¨

The beauty will be remembered for her expose in late 2019 that roped in her sister,  ex-hubby, Okari and his friend, Ken Mijungu, among others, and it didn´t end well.

However, she is still walking her paths, head held high and smile too charming to entertain negative energy.

She revealed that ¨this year´s biggest goal is to encourage women out here to keep pushing¨. 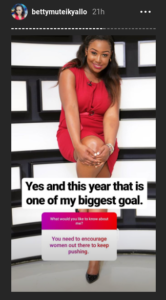 An inquisitive fan, threw in the towel posing ¨When are you getting married?¨ and the mother of one was quick to respond ¨When I do 💥¨

A word for her haters:

Negative energy is never my problem. It´s the haters problem😊Only I decide what I take in, the rest to me is noise.

¨No one puts Betty Down!¨ she declared. 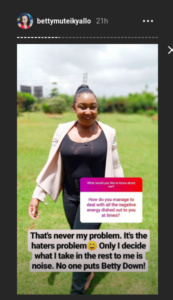 Speaking of her flaws and insecurities, Betty penned:

I fear not making it in life as per my own set goals. Love is my weakness, impatience is my flaw. 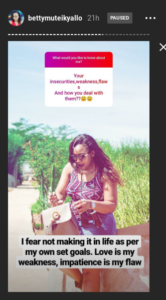 My daughter in ICU. My accident back in 05. 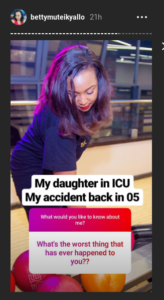 She closes off with a mantra of her own:

Life is a journey in which if you let fear be your driving force, you lose out on the adventure of living. 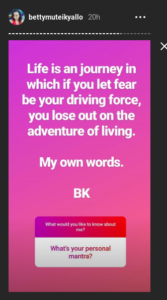