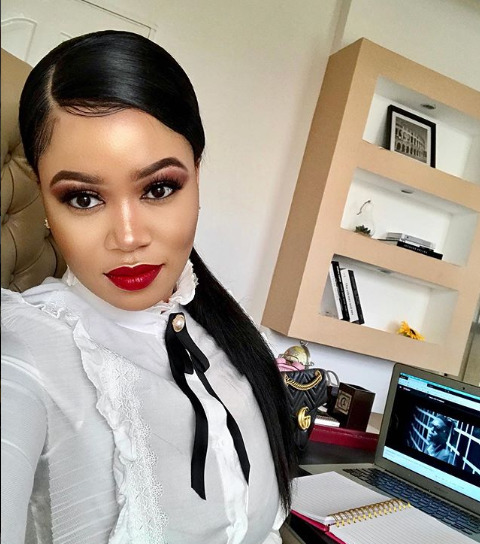 Kenyans have been on a row with the government about which flights to cancel and which ones to allow in. Socialite, Vera Sidika has however questioned the reasoning of the argument.

Wednesday, the 26th of February, a China Southern Airlines flight landed in Kenya with at least 236 passengers aboard, an event that rattled Kenyans sanity on the government´s intentions.

Netizens felt that the government was taking the COVID-19 pandemic a little too lightly, making it worse by letting in flights from the virus-struck country whose death toll and infected cases are so far the highest. 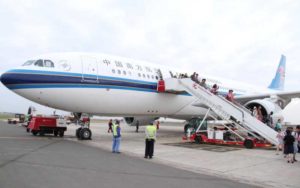 Kenyan businesswoman, Vera Sidika took a different angle on the same, bashing Kenyans for pinning the blame on the government, yet their solutions weren´t making the situation any better.

Netizens were of the opinion that all China flights should be banned from jetting into the country. The socialite however posed: what of flights from other virus-struck countries? 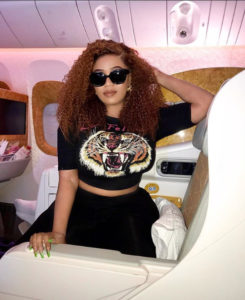 She went on a public rant online thrashing:

So many people busy blaming the President for letting the flight from China into the country and that´s dumb. Been debating with everyone telling me this and they think they make sense. Honestly if anything was to be done at all, could be to cancel all flights. From everywhere. Not just 1 route😂how do y´all even reason. 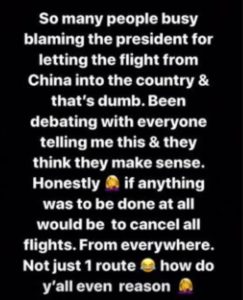 Sharing a conversation she was having with someone in her DMs, Vera argued that not just one plane should be banned, if anything, all flights should just be called off.

Because one, Kenya´s zero patient was not a Chinese national, neither was she coming from China. Second, banning a flight from China and letting in flights from Europe, where the virus has also struck, makes no sense. 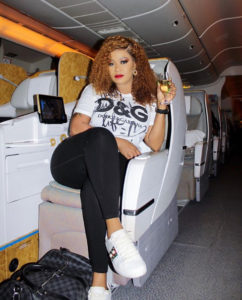 So China planes have been stopped but ones from UK are still allowed in, giving leeway to the spread of the virus into the country.

Her partying shot was: Stop blaming the government.

Now China planes stopped. But the one from UK is allowed in, still bringing in the virus. U can´t control the situation at all. 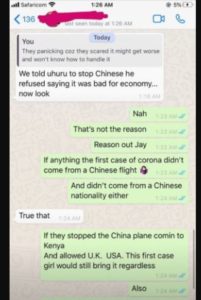 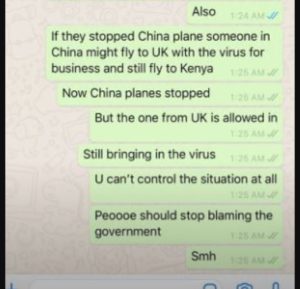