¨We are never going to patch things up!¨ Kenyan singer, Rawbeena opens up on toxic friendship with KTN TV Host, Chero 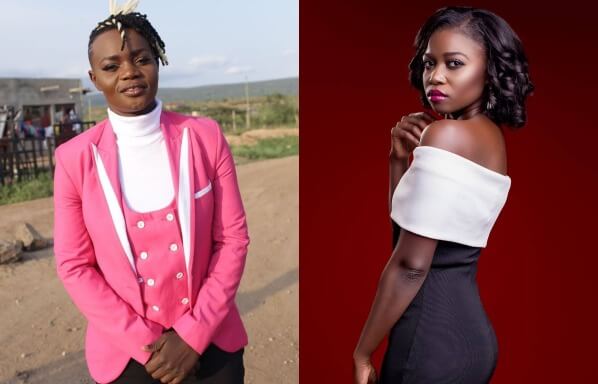 Finland-based Kenyan singer, Sylvia Barasa alias Rawbeena has returned and she opens up on her toxic friendship with KTN TV host, Chero, that saw them split.

The two have been known long-term friends but their crude split was a blow. According to Rawbeena, she financed Chero´s flashy lifestyle but was taken for granted.

Up and close with Mpasho, the Kenyan songbird explained how it all hit rock-bottom.

People who knew me to know that I was close to her. It reached a point there was so much madharau and I despised them and decided to move on with my life especially when I realized I was losing a lot of stuff and a lot of property. I really work so hard so when someone take me for granted I do not like it. I don´t do promiscuity, I have kids who look up to me. Further revealing that indeed Chero no longer has access to the singer´s social media accounts.

Yes, she is blocked from all my social media pages. I feel like if it´s not respectful, forget about it. If it´s making you lose yourself, forget about it. People who know me know what I entertain and what I don´t.

Just to clarify, Rawbeena stated that she has no ill-intentions on the media personality.

It´s not about speaking badly about her. People who were close to me and Chero knew what we were doing. It however, reached a point we had to go to the police.

Heavy is the crown, yet she wears it like a feather. There is strength in her heart, determination in her eyes and the will to survive resides within her soul. She is a warrior, a champion, a fighter, a queen. She is you.

To put across the reality, the ´Romantic´ singer disclosed that Chero was not her manager, in reality, it was the other way round, Rawbeena managed Chero.

Contrary to what people believe, Chero was not my manager rather, I was managing her brand, cleaning her up. There was a time the lies and the disrespect became too much.

Unfortunately, it did not last long.

After 2 years of being friends, there was no development. There was a time I was here for 6 months and I intentionally said I did not have enough cash to use while here and that is when madharau started. Her sister even started abusing me. The last time I spoke to her, I told her she was forgiven. Rawbeena however admitted that Chero played a key role in her life but enough was enough and they had to part ways.

She did a lot for me but it got to a point where nilimchukia na nikamdharau. Chero tried to evict me from a house I paid for. One of her friends told me to leave that I was being negative energy. Luckily for me, I had payment slips to prove that I was the owner.

Rawbeena is back in the country to promote her latest hit ¨Kiboko¨ but for her, things ended and nothing can mend the broken paths.

We are never going to patch things up. People would even despise me if I did that. It´s not that I hate her but the friendship was toxic. ¨Kiboko¨ singer, Rawbeena, back in Kenya

She however learnt her lessons.

What I learnt is that people will use you and they won´t care.