Abel Mutua: Uhuru Kenyatta paid me well to be his brand ambassador Abel Mutua has opened up about the ups and downs in TV production. The popular actor also shed light on the lucrative deal with president Uhuru Kenyatta.

2010-2012 was the most successful period in Abel Mutua’s career. The popular actor-cum-script writer was earning approximately 200,000 a month from his job.

Abel collapses in the bathroom

The former Tahadi High actor says he was forced to take a sabbatical after he collapsed in the bathroom. Apparently his work got the better of him and he had no option but to take a break.

“After four years of constant writing and acting, I collapsed in the bathroom one evening from sheer exhaustion and I knew it was time to take a break. I’d overexerted myself. I felt I had nothing left to give so I quit my job, which some thought was very stupid and some thought was very brave.” 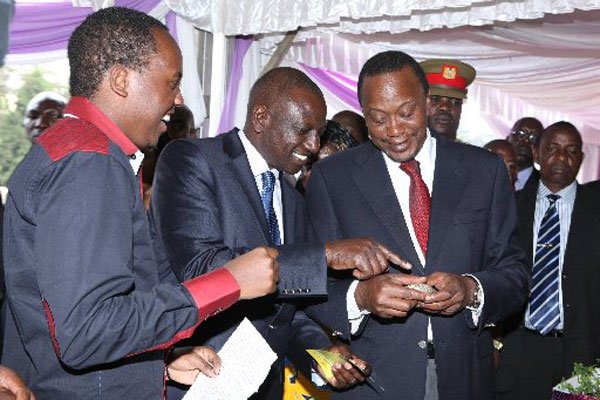 Abel Mutua, DP William Ruto and president Uhuru Kenyatta in a past event

Abel landed a lucrative while he was on a break from work. The popular actor was appointed president Uhuru’s brand ambassador. He says he was well paid for the job.

“I landed on my feet as I got a role as brand ambassador for a politician who was running for president. It paid well, but after a year being out of the creative scene, I was itching to get back.”