2 in 1! Davido officially proposes to a heavily pregnant Chioma [video] 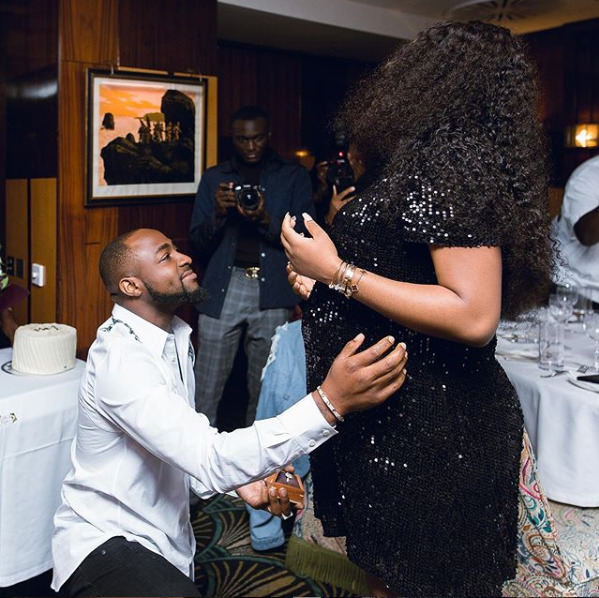 Nigerian superstar, Davido Adeleke must be obsessed with his girlfriend ‘Chioma’ and he now flaunts her baby bump during his proposal to her.

On a light note, Davido had early in the year done a video testing whether, when the day comes for him to propose to a loved Chioma, she would agree to it.

Funny how a ‘No’ was the answer he received but that was just on a light note.

But for sure, seems this guy already had a vision on his plans for the year and has come public about it.

Just last week, the ‘Assurance’ hit maker, officially went down on one knee for his beloved Chioma who said ‘Yes’ and was crowned with a flashy diamond ring.

Seems this was the golden moment the Nigerian singer-songwriter had been waiting for all along, even though Chioma wasn’t ready.

In another of his posts, he gives us a glance at his sweetheart’s engagement ring and referring to Chioma, he sweetly captions:

The multi-award winning artist decides to call it a day for his fans and followers. But next day, he is up, with a photo that explains everything that went on during the proposal.

So, one knee kissing the floor, right hand on Chioma’s belly, a belly that has for sure nursed a fetus for couple months now, bulging out. Yet a photo so adorable.

All an emotional Davido could say was:

Looks like Davido has said no to more babies born out of wedlock and wants this forthcoming one to meet mama with a ring on her finger, at least an engagement ring.

However, Davido might have set 2020 as his year to legally declare to the world that Chioma is his wife and mother to her kids, till death does them part.

This is basing on his caption: