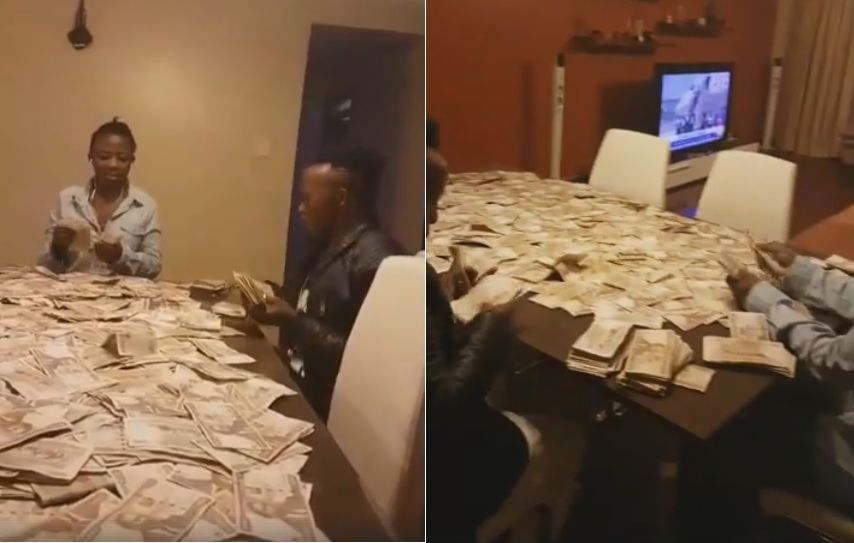 Popular gospel singer Papa Dennis has stirred up plenty of bile after he was seen counting hundreds possibly thousands of 1000 Kenyan shillings notes.

Papa Dennis attracted criticisms from Kenyans who felt his decision to flaunt loads of cash on social media was uncalled for.

The gospel singer shared a video of him and an unknown lady showing off plenty of 1000 Kenyan shillings notes at his house. He said in the caption that he was back to work after election.

Most people who commented on the video expressed their anger with the gospel singer. See some of the reactions below:

Richard Omuga: Marry a second wife na kama unaye oa wa tatu. Moral of the sentence hiyo pesa yako ni kidogo. I can bet you live in a rental house and Kabogo can never do this.

Emmanuel Oche Idoko: the day i see Bill Gates show off cash dis way, i’ll commend u but until then, kno dat empty vessels make d loudest noise. stop showing off loaf of bread when another man own the bakery and don’t show off.

Makos Amor: Dont you think its unfairl to display money when my house is closed due to non payment

Matex Chukwuleta: There is no big amount here ,he is just a little poor boy who though he is getting it right ,have you seen dangote showing money ?

Uzi Vert De Khalif: Camera man has the opportunity to kill both of them and run with the money

Pius Alby Xbm: That is small amount bana, some of us if we empty our accounts n spread them like that,U call G4S for security

Daniel GxRugged Revelations: Please watch your excesses, this is not advisable, my dear brother, it will only attract dangers. I pray God gives you wisdom.

Kweyu Jnr: Sasa mki withdraw all the money in your accounts and lay it on the table…….. Be smart ?

Joseph Masta: These are today’s Kenyan gospel musicians. Very ignorant of the gospel they preach

Isaac Adams: You see the useless girl beside him as soon the money finish she will run…man look smart you acting like a baby .

Kay Seven: Gospel imetake over ama imekua taken over? Its not bad showing off but why sponsor it???

Mbo Banen Tikpabayal Samuel: Ooh africa!! Why wouldn’t the whites insult us. Black mentality. Even Bill Gate the world richest man will never do this.

Lenin Koech: People with real money don’t show it off. Only proves to show how small money is still new to you, don’t worry you’ll get used to it soon.