Awww!! What Huddah Monroe said about Tanasha after turning down her baby shower invite 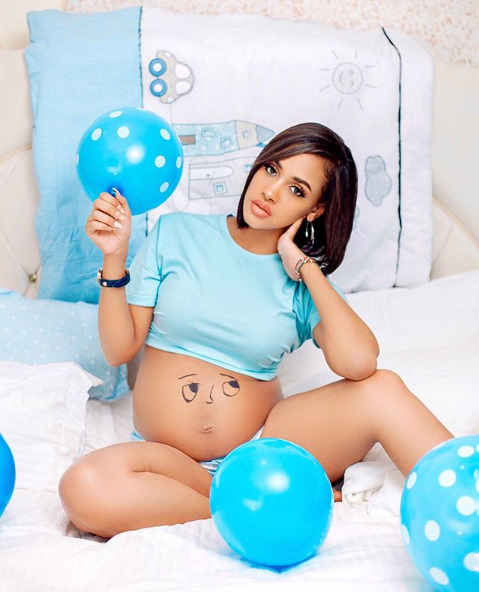 Petite socialite, Huddah Monroe took the back seat at Tanasha’s baby shower after failing to show up despite the invite.

Her dramatic counterpart, Vera Sidika decided to fill in her position too after stepping out in a mosquito net that barely left anything covered. 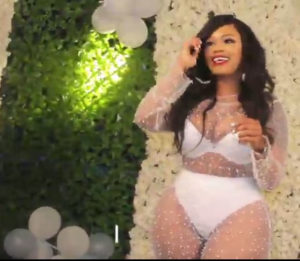 Well, away from that, Huddah got invited but turned down the invite after failing to show up at the star-studded much anticipated event.

Huddah alleges she received the invite but had to tend to some unfinished business. Through social media, the businesswoman shared a screenshot of one of her chats with a fan.

The fan probes Huddah’s invite to Tanasha’s baby shower before Huddah responded affirmatively but turned it down because she thought she would be out of the country then.

However, she revealed that she is still in Kenya clearing some business before leaving.

Despite the turn down, she congratulated the soon-to-be mother describing her as a cool sweetheart who doesn’t make foes.

Tanasha Donna is a sweetheart with the cleanest heart. She has no drama, no enemies and creates none. How time flies…congrats on your big day beautiful. Above all, put God first. ❤

Further disclosing that were she to be in attendance, she would dress in pajamas. Probably way better than Vera’s see-me through jumpsuit that left jaws dropped and tongues wagging. 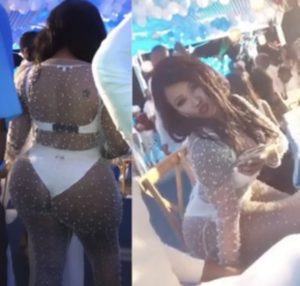 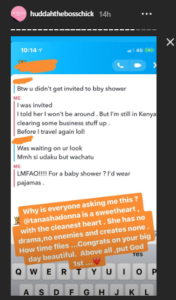