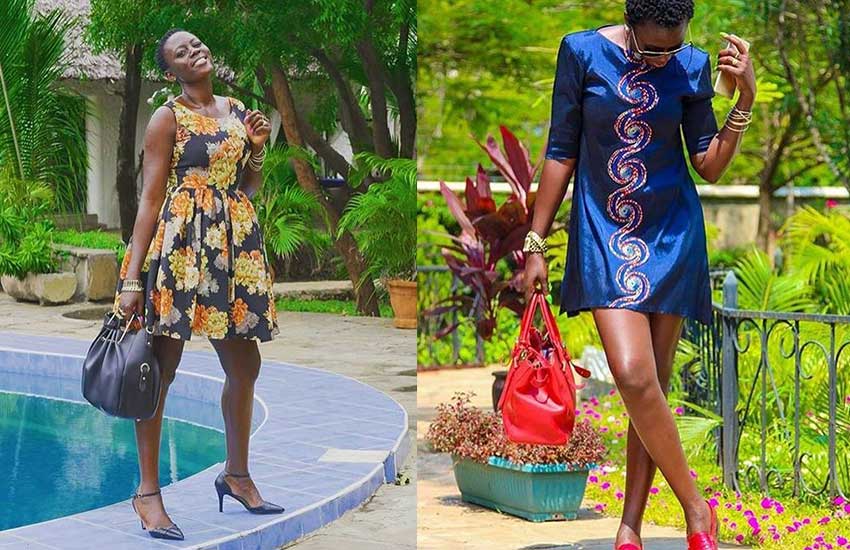 Madam Boss Akothee has proved she is a fierce lioness after ripping off her weave, slamming her body shammers and challenging them to her soon-to-be transformation.

The mother of 5 recently flew out for a 3-month stay in France revealing that skin bleaching and body transformation are among her to-do list while there.

In a series of online videos, the black beauty claps back at haters who think her recent makeup and wig stunt are making her look artificial.

She even goes ahead to tag them ´EOC – Enemies Of Change´ let alone b!tches and idiots.

Idiots on one side pris Dr E.O.C 👉muje link on my bio

According to her, the naysayers should just buy a doll, name it ´Akothee´ or ´Madam Boss´ and do whatever they feel is right with the doll.

So that they can now keep off her lane and let her be because she believes now that she has money that many might not have, they are just too mean with comments.

Akothee flaunts how expensive her make up and wigs are articulating that she is no ordinary kind of woman.

That was just but a tip of the iceberg because Madam Boss further reveals her intentions to get a cosmetic surgeon to work on her body.

I am sourcing for a plastic surgery doctor.

Then I want to extend my buttocks [my nyash] so that my future will be from behind.

And when I walk, people will be looking like, who is that babe?

Additionally, to complete her make over, the nose, lips and accent would come in handy:

Then I also want to slim this nose.

I want the lips to pop out.

And then, I want to change my accent, I wish the doctor can just slit my tongue so that I can not have this heavy tongue, like my dad unfortunately.

When I´m in the US, I want to swallow the English.

Her grammar might not be as polished in the first place but with the money, she believes her accent can come out polished, let alone her basic grammatical errors.

THANK you Thank you OSLO its only love that hurts , I love you soo much my fans thanks for loving me back @oberax2entertainment

That is not it because her upper body needs to be taken care of as well as her limbs.

The dashboard, I want the doctor to come and mould and make these [boobs] big so that I don´t have to always put it in the sac, so that I can be always going to the beach.

Not to forget the 6 pack [laughing], I´m tired of going to the gym mahn!

It´s easy! I want the doctor to come and arrange them.

Oh, and I am sorry for my knocked knees, maybe the doctor can elongate, maybe can do something.

I THINK I FORGET MYSELF AT TIMES , WHOM DID I THINK I WAS TO MAKE A MOVE WITHOUT SECURITY THOUGH 🤔🤔 DID I THINK I WAS IN TURKANA? The first time trying shit without security , not even my personal security NEVER EVER AGAIN 🤔🤔🤔🤔 that was TRAUMA , fan love is real , but it can get dangerous & overwhelming for an artist , never underestimate the crowd, at some point I had to play hide and seek with a guy who almost lifted me up😭😭😭😭 thank God Fans came on stage I could hide between them, I looked left right to give signal like hey I need help 🙆🙆🙆🙆, but everyone seems to be having fun and they thought it was my way of enjoyment 🤔🤔🤔🤔🤔I received alot of slaps in my flat buttocks and you know they are almost bones , some slaps really went INNNNN 😭😭😭 , I Dont enjoy Spanks If a man did it to me in the middle of SEX , I woukd simply stop and put on my panties, 🤔🤔, is it a fight🤔 I cant upload that video my crush will go maaad , @billyblaanks visa delayed I missed my brother @foky_mopao soo much , @nellyoaks 😭😭😭😭😭😭😭😭😭I got into the hotel and broke down 😭😭😭😭😭😭😭😭😭, Thank you OSLO THAT LOVE WAS UNIQUE OF ITS OWN KIND I LOVE YOU RIGHT BACK GOOD BYE TILL NEXT TIME 🙏🙏🙏🙏🙏

She goes on and guffaws about how beautiful her life is with money because she is now tired of temporary:

Life is so beautiful with money.

I want to make you feel so bad, to annoy you so much; because with the make up I can wash, with the hair I can pull and push but now we are going permanent.

Seems her skin has been pricked enough and is out to slam the naysayers who unfortunately might not have amassed as much wealth and status like she has:

And it is expensive.

I think the whole process will cost me like 100 Million… I don´t know.

Her concluding stunt is just at another level:

Dr E.O.C are we tugeza🤔 link on my bio though 🤣😂😂 teamnatural meat me in karura forest shortly 🤣😂😂 bye

Vera Sidika´s cosmetic surgery might have eaten into over Kshs 1 Million.

But Madam Boss cares less how much hers might eat into, all she cares about is her transformation to slam the haters.

The controversial artist previously revealed that she will be enrolling in French classes, driving school, gym and Zumba classes while in France.

The philanthropist however doesn´t forget to leave a note of caution to the Kenyan community who might have it rough once she returns.

Kenya catch you in September so I can give you more headache.

We have missed 3 trains since yesterday 🤣😂 and its all fun, I just drop by a coffee shop and wait for the next one, as I read the comments, insult you back, block you and as you struggle to open another account to like my addictive page, I am enrolling for my French classes 👉Driving school 👉Gym and Zumba classes 🤣😂 🤳Kenya catch you in September So I can give you more headache Muje Link on my bio 🤣😂🤣😂 Zurich catch you 8th June

She further adds that she will be learning survival skills while in France´s capital alongside her daughter, Fancy Makadia .

Learning a few tricks of Paris survival with my daughter, just in case we don´t have cars or can´t afford taxi anymore.

@fancy_makadia , You are the copyright of your dad , my best friend Jared, you look like his dad , your smile reminds me of how He used to sneak into our compound , give me an album full of his photos and 100 shillings on the last page 🤣😂, his mom calks me kadera, His dad knows that I am the most Chicky woman ever 🤣😂, your uncles believe in me ,I saw all of them grow into mature men , always respect family ,its a bond that can never break , study hard get a job and invite your family to France too . Call dad today inform him about your new school , I love you girl @fancy_makadia

Sure enough, she did enroll in a driving school while Fancy tutors her on French.

Auu can't wait to hold my French driving license, so I can buy a big car for me and my family 🤣😂 ready to drive around Europe , which part of Europe are you from Mrs Summer is ready by 24th June , I will be able to count 1 till 10 in French too 😂 🤣 🤣 🤣 zurich winterthur see you on the 8th

However, her daughter being admitted to a French University might have been the major prompter for her stay there having channeled over Kshs 2 Million into her fees.

While there, Akothee is set to stage couple of International performances.