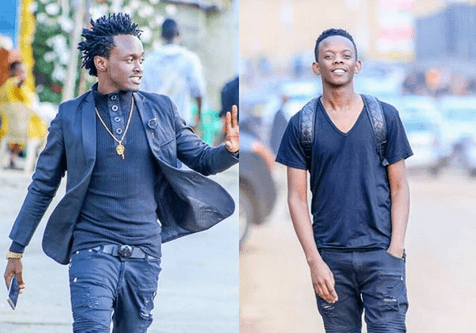 Gospel kid, David Wonder slams Bahati for lying about the Ksh 6 Million debt that him and Mr Seed allegedly owe him.

David Junior Odera alias David Wonder opens up that the EMB records´ CEO lied about spending the sum of money to build their careers.

As a Christian, I don’t see the need for telling lies.

When I heard Bahati’s remarks that he spent more than Sh6 million on us, I was shocked.

Bahati over the weekend revealed the debt on NTV channeling allegations towards the now grown gospel artists.

I have never said this anywhere, but these guys owe me more than Sh6 million.

And that’s why I am telling you they created a story to trend but time will tell.

According to Bahati, the 2 artistes are coming after him and making up stories just to trend, though not for long.

The ¨Msalaba¨ hit maker exited the record label in February this year in a bid to build his own brand.

Further revealing that since his exited, he has never spoken to his former Boss, Bahati.

However, David Wonder cannot figure out the exact money the two owe him, but he believes, Mr Seed is in a better position to give the actual sum of money.

According to Mr Seed, Bahati lied about the figure…

If Seed says so, and he was very close with Bahati then I have no reason to believe there is an alternative fact,

Keep doing the right thing, keep being good to people that are not good to you, keep smiling, keep a song of praise. That’s not just being positive; that’s an ATTITUDE OF FAITH. That’s what allows GOD TO SHOW OUT IN YOUR LIFE. BLESSINGS UPON YOU TODAY 🙏🙏

This he attributes to the fact that while still in EMB records, Mr Seed and Bahati have been close allies.

Mr Seed´s response on the other hand is:

But my brother.. I love you and because of the love I have for you I forgave you for everything you did to me and my family …

but I wonder why you should go n lie live on national TV??

Anyways GOD BLESS YOU FOR EVERYTHING NO HARD FEELINGS THOUGH

I have achieved so much in 3months I give God all the glory.. But my brother.. I love you and because of the love I have for you I forgave you for everything you you did to me n my family .. but I wonder why you should go n lie live on national Tv?? Anyways GOD BLESS YOU FOR EVERYTHING NO HARD FEELINGS THOUGH ..