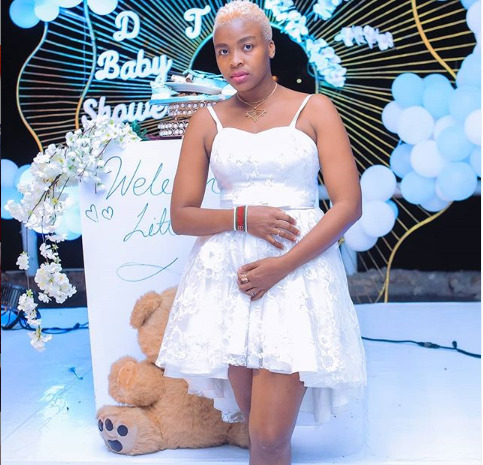 Pregnancy rumors are one thing that tend to ignite a set of mixed reactions from fans especially in the celebrity world.

More often than not, questions raised usually circle around: Who is the baby daddy/mama, the baby’s gender, how many months pregnant and any other that pops in your mind.

So now, rumor rumor is that Diamond’s sister, Queen Darleen is expectant. The younger sibling to Diamond however distances herself from any of it.

The ‘kijuso’ singer blasts critics whose daily job is to spy on individuals and splash fake news on social media.

And her being pregnant is a good example of such.

Sharing this with a ‘Yo Fave’ reporter, Darleen literally asked the journalist to clearly look at her and tell whether she can see any protruding belly.

That is just social media, as you have said, stories on social media, so this is just as simple as that, one of those unfounded stories. Look at me, look closely, do you see any pregnancy?

True to it, the reporter could see no bump.

Diamond’s sister additionally spoke in regard to Mondi’s official photographer, Lukamba Official who is alleged to be dating her.

Clarifying on the same, Darleen articulates that Lukamba is like a brother to her and only share a professional relationship.

Her pregnancy was definitely news. Because apart from being pregnant, masses were questioning who exactly her man could be. One we are yet to be introduced to.