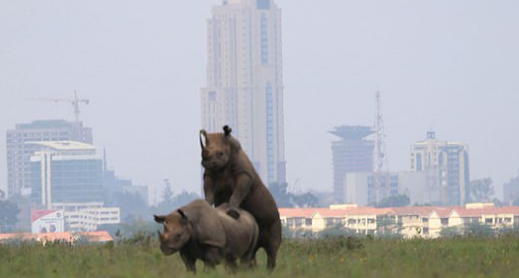 Kenyans, as usual, had nothing but fun on social media yesterday after Kenyan Wildlife Service took to Twitter to post a photo of two Rhinos mating.

We all know how such posts, well, just any post, get Kenyans on Twitter excited. KWS was looking to market the Nairobi National Park but the conversation ended up switching to totally something else.

“What’s a Wednesday afternoon timeline without a little romp? Talk about Sex and the City!” the post read.

What's a Wednesday afternoon timeline without a little romp? Talk about Sex and the City! ? #DiscoverNairobiNationalPark

While others called for moral cop Ezekiel Mutua to bash KWS for their immoral post. Others were quick to connect it to Huddah’s recent Funga Duka campaign which encouraged women to abstain from having sex.

Here are some of the tweets:

Did you know that #DiscoverNairobiNationalPark is one of Kenya’s most successful rhino sanctuaries and has received wide acclaim all over the world?

Hatuwezi funga duka when we are on the mission to save and increase population of a threatened species. Come #DiscoverNairobiNationalPark and see what action plan we have for the black rhino pic.twitter.com/3sWCqpG7V8