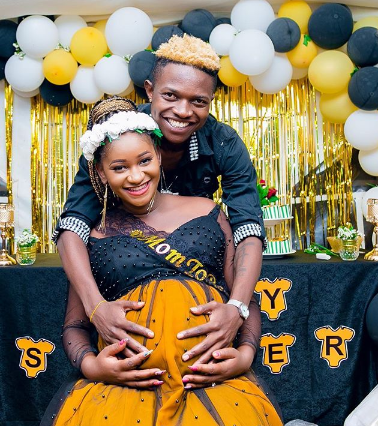 Once good friends, it seems gospel singer Bahati, his wife Diana Marau and former signee Mr Seed and his wife Nimo are no longer in good terms after falling out.

It all started when Mr Seed left Bahati’s record label EMB following a heated argument on New Years eve that saw Marua call the cops on Nimo for allegedly having a food stand at Thika Stadium where Bahati was performing.

Mr Seed then later on came out to blast Bahati for his act and accused him of not even paying him for the gig despite his wife being heavily pregnant. “The word says, : Love your enemies, do good to those who hate you,bless those who curse you, pray for those who mistreat you.
#throwbackthursday Don’t use your energy hating people this year ❤️❤️❤️ spread love ama aje????” said Nimo before their beef became public.

Well, Mr Seed and Bahati during the weekend had their baby shower and guess who were not present? Bahati and Marua.

Judging from the photos posted on social media, the two love birds had their celebration at Ridgeways inn and Marua is not among the ladies in the photos.

Marua nor Bahati haven’t also posted the photos on their platform also to congratulate her as they normally do.

Fans, in the comment section however, were glad that Marua didn’t make it to the event. Many argued that Marua has been jealous of Mr seed’s wife and therefore didn’t deserve to be there.