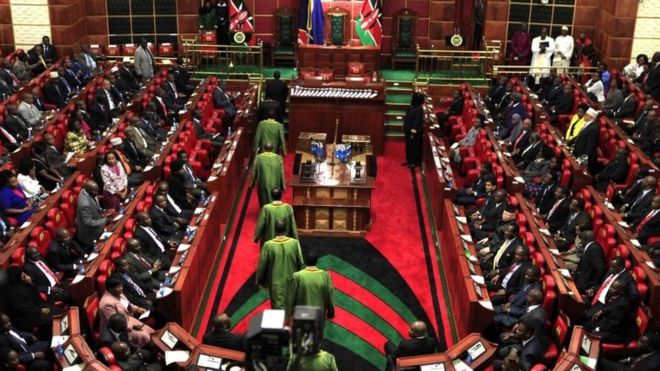 While Kenyans were busy sleeping awaiting another day to continue propagating tribal politics on social media, Kenyan lawmakers who are second most highly paid lawmakers came together to award themselves a whopping 2.5 billion shillings for 8 months of no work.

That’s the length of time by which their five-year terms will be cut short by the General Election on August 8 and thus they have awarded themselves a sendoff package worth Sh12.9 million for each of the 349 members of the National Assembly and the 62 members of the Senate.

MPs have been piling pressure on Treasury to allocate money to compensate them for their shorter term and treasury finally gave in last night allowing the money to be drawn from Parliament’s Sh36 billion allocations for 2017-18.

The powerful Budget and Appropriations Committee had argued the money was to cater for parliamentary staff at the constituency offices, who have a five-year contract with the Parliamentary Service Commission.

However, the Treasury and the budget committee struck a deal on February 6 — the gratuity for staff will not come from the PSC but from National Budget estimates to be presented tomorrow.

Treasury’s decision by the Treasury to budget for the gratuity for the hundreds of contracted staff was seen as a ‘scheme’ to indirectly validate the MPs’ budget surge.

“National Treasury reassured the chairman there was a line budget for them,” read minutes of the meeting attended by Finance CS Henry Rotich and PS Kamau Thugge.

Even with all this counter reactions and even a court barring the same, the legislature has still had its way.

It’s truly a sad day to be Kenyan!