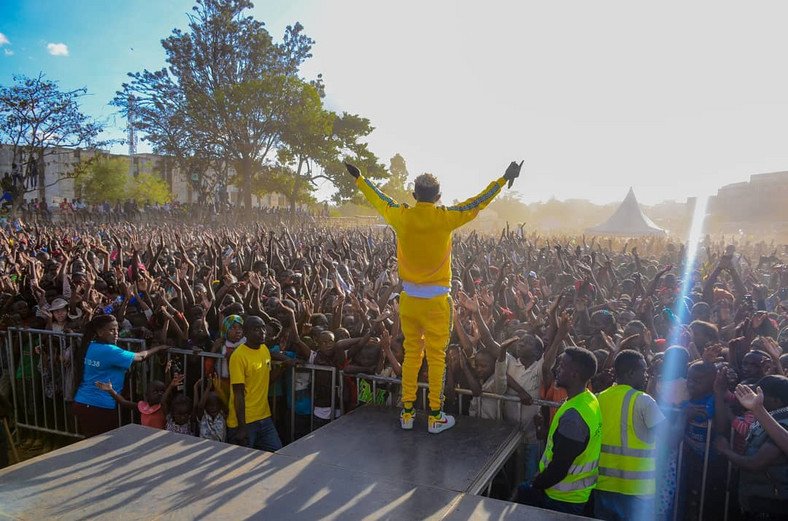 The well received ¨Made In Huruma¨ concert, that went down in Huruma Primary School, in Huruma estate saw nothing but a successful artist, humbled by the massive unexpected turnout and attendance of the industry´s bigwigs.

Let us first do some background checks of the event´s preliminary activities:

So this is how it all started:

ROAD TO MR.SEED MADE IN HURUMA CONCERT… caravan iko ma area.. Piga Picha ukipatana nayo then post then tag me ☺☺ …tomorrow it's going to be BIG.. GLORY TO GOD… From 12pm to 6pm ..venue : HURUMA PRIMARY SCHOOL… SHUTTING DOWN HURUMA TOMORROW 🙏🙏

The turnout alone, during the event´s promotion might have already hinted on the concert´s success but maybe that wasn´t such a guarantee at the time.

The ground was getting set:

Getting ready for TOMORROW.. set up going on…. TOMORROW WE ARE MAKING HISTORY FOR GODS GLORY…. MR.SEED – MADE IN HURUMA CONCERT.. #2019isMyTIME

A quick reminder to those whose busy schedules might have let the event skip their minds:

GOD LET YOUR WILL BE DONE THIS DAY 🙏🙏🙏 MR.SEED – MADE IN HURUMA CONCERT . . . today from 12 ..make your way to HURUMA PRIMARY SCHOOL… ENTREE FREE FREE… COME LETS HAVE A GOOD TIME IN THE LORD Edited by @acephotographyke

Then a FREE entry for ALL!!!

The location was given, ground set, audiences informed and the concert was FREE!!!

So, onto the D-day, to determine it´s level of success or failure:

Let no one tell you that you can't do it…. Someone somewhere said that I was useless ..but GOD saw something different… Thank you HURUMA.. IT WAS A SUCCESS.. GLORY TO GOD ABOVE 🙏🙏YA'll came out to see what GOD IS DOING IN MY LIFE.. I LOVE YOU so much ❤❤#2019isMyTIME MR.SEED – MADE IN HURUMA CONCERT… SEE YOU IN A BIGGER VENUE ☺☺ .. GOD DID IT

Dawmn!!! The masses were just overwhelming for the gospel star whose recent past months weren´t such a reflection of mass numbers.

The audience was just to receptive for the FREE gospel concert, Mr Seed, could not thank the fans and God enough for carrying the day, savoring the moment of his lifetime and showing him so much Love.

YESTERDAY was the best day of my life… I can't even believe what God did.. Thank you to all the artists and djz n fans who came out to support me… GOD BLESS YOU ALL… #MrseedMADEinHURUMAconcert

On and on, post after another, his gratitude could be seen effortlessly.

Now let´s move on to the bigwigs present at the much successful event.

Let´s start with adorable princess Ladasha´s mother, Size 8 reborn, whose live performance was as stunning as her beauty:

Mama Wambo @size8reborn I wanna thank you for coming through for me..you really killed it ☺☺..🙏🙏 may GOD BLESS YOU ABUNDANTLY.. #MrseedMADEinHURUMAconcert @bobshotit

Onto the next one, Willy Paul, who´s recent controversial music line might have not made him as receptive, but Oh Well! We didn´t see this coming:

And WILLY PAUL came through to give me his support… THANK YOU BLOOD!! ##MrseedMADEinHURUMAconcert

Yes, the sensual artist did punch in his controversial love songs and Yeah, the audience sang it all.

@timelessnoel my hood loves you bro…. THANK YOU SO MUCH FOR COMING THROUGH… GOD BLESS YOU SO MUCH BLOOD #MrseedMADEinHURUMAconcert

Who else if not the short, Moji Short Baba, whose presence actually just barred the DJ´s mixes.

His part of the concert might have been the longest and most interactive of all.

For one he is celebrated in the gospel music industry for his exceptional punch lines, dance styles and inspiring messages.

Celebrated gospel Kenyan DJ, baba Wambo aka DJ Mo was the one manipulating the decks, whose entrance alone, was done in style:

However, this did not bar his success in the competitive Gospel industry that saw the audience´s reception to his major jams like: Ndogo Ndogo baffle him.

That might be it for those in attendance, however, the emotional bit of the concert was unleashed after Mr Seed broke to tears.

The ¨Made In Huruma¨ concert host, Mr Seed was too overwhelmed by the show that saw him break down to tears in the arms of his mother, who did comfort him and came out proud of her son.

It was a dream and God made it come true …and to be honest it was so emotional… My mama came through pia.. THANK YOU GOD 🙏🙏 #MADEINHURUMACONCERT #2019isMyTIME

Now, that´s how the successful yet emotional gospel concert went down.