Flamboyant socialite Huddah Monroe is living her dreams in Dubai; flossing the flashy lifestyle anyone could wish for. Rumour had it that the socialite’s lavish lifestyle is being sponsored by a rich boyfriend; whom she never wants to reveal. She tends to keep her love life offline anyway. In addition, her stay for over a year led to speculations that she’s under house arr*st alongside her boyfriend; something which she was displeased with.

The boyfriend was allegedly arr*sted, leaving Huddah under investigation, which requires her to remain in Dubai.

She calibrated the claims later on and the allegations slowly faded. She recently claimed that she will coming back to Kenya; adding that she has missed her motherland.

However, even though she’s missing Kenyans, she’s not impressed by Kenyans living in Dubai.

According to Huddah, most of them gossip that she’s broke & living from hand to mouth in the sumptuous city.

”This is why I don’t hang with Kenyans in Dubai. I don’t even know many Kenyans here only 3.  And y’all know where I live in Dubai lol. Dubai is very small. Most of you could never and maybe will never with this rumour filled jealousy of yours.

Keep wishing me bad. While good keeps coming my way.” 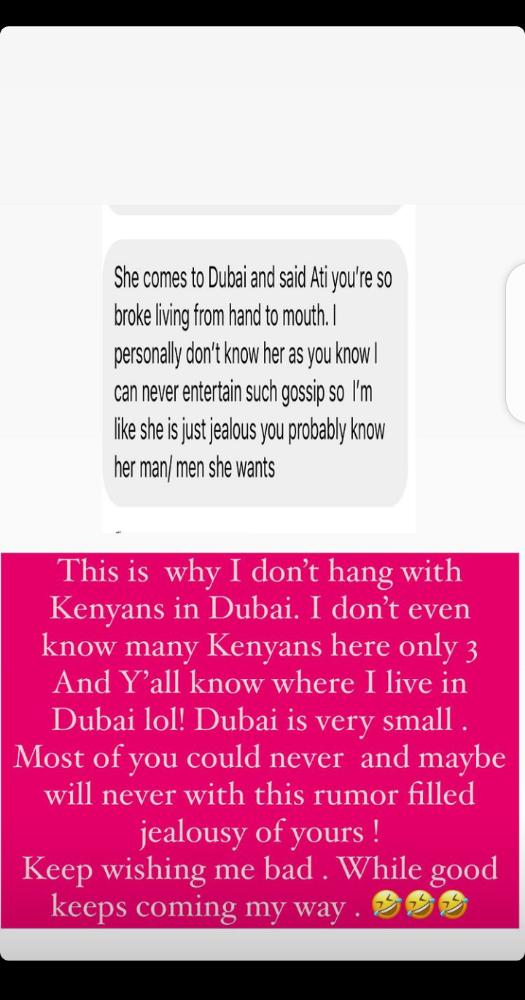