“I love you so much” Nabayet blatantly confesses her undying love for ex, Otile Kenyan-Ethiopian couple, Otile Brown and Nabayet is one we find hard to understand. Today they are in love, tomorrow they are not and then it all starts again.

So barely this week, the Kenyan RnB singer sent heartwarming messages to his presumed ex-lover, Nabayet as she turned 25.

Long, yet so sweet for the world to believe that they are apart. Reminiscing days when they first met and could not get enough of each other. Days when their hearts collided and never looked back. 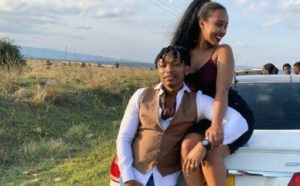 We thought, Otile ignored Nabayet for Vera but looks like he was just waiting for the right moment. To each, their own.

Otile composed a remorseful piece for the Ethiopian beauty, pleading for forgiveness and asking for a second chance in their love story.

Nabayet initially seemed reluctant but looks like time has softened her heart and is promising of a future between her and Otile. Otile’s message to Nabayet on her B-Day reads in part:

Relationships aren’t easy and the more serious it gets sometimes, the more terrifying it becomes because we’re young and stupidly cursed but I’m ready to risk it all for your fine ass. Happiest birthday Nabbi. I’ll make sure I have something special for your fine *ss when we link. InshaAllah!

And soon after, the birthday girl commented on his post, leaving nothing to imagination as she replied:

I love you so much.

Well, you can be sure fans took note of this, even though Otile later deleted the post but a message has already been sent, probably decoded and all we are waiting for is, Action!

We wish them well!