If it’s not that, I’d have taken him to Brookhouse – Bahati responds to trolls on Morgan’s school-going Reality TV star, Bahati is a family man and a father of 4 kids who he needs to cater for, to the best of his abilities.

However, seems he missed out on one, Morgan who is his adopted son. Kenyans raised concerns over his kind of care for the school-going child who dresses in torn uniform.

In one of his reality shows, the gospel singer took us through the school Morgan attends, Upper Hill Junior Academy so that Bahati’s ‘mum’ can look at the progress of their grandchild. Bahati with his ‘mum’ at his son’s school

Apparently, among the revelations made was that Morgan does not attend an expensive school and also wears torn uniform to school.

Surprisingly, Bahati, his wife and the other 3 children they house, live a pretty flashy life without limits.

In past interviews, Bahati has claimed to be working himself out to ensure he gives his family the best and makes his late mother proud.

And concerning Morgan, this is what he had to say: 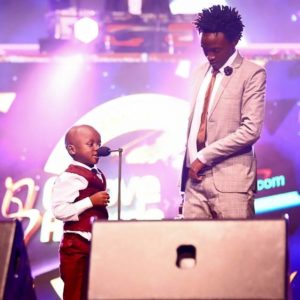 Bahati with Morgan, at a young age

Funny thing is how he publicly stated that of all his kids, Morgan is his favorite because he is a true reflection of who Bahati was while still a boy.

With all the kids, my favorite remains to be Morgan. Every time I look at him, he reminds me of a lot of things, I push him to be the best person he can be. That’s my best son.