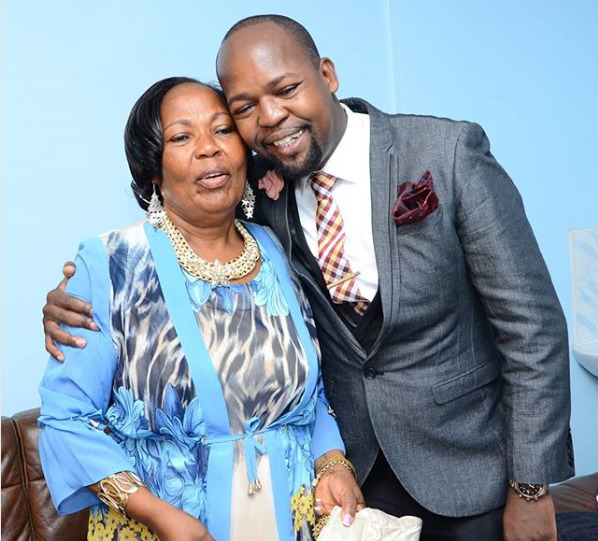 Head of Radio at Milele FM, Alex Mwakideu was forced to open up on his long journey of battling with alcohol following a curios fan´s speculation.

The radio presenter shared a photo of himself posing next to a red bottle that he never seems to miss in every photo he is part of.

So a fan believed that there must be an alcoholic drink inside. This is before Mwakideu quickly refuted the claims, revealing that he actually quit alcohol because of his mother. 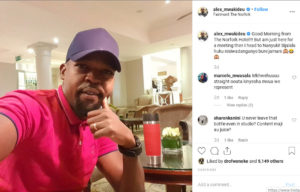 The radio guru stated that his mother had insisted without end, that he should quit the drink ´that bore not much importance´ in his life, until he realized she is right.

He apparently quit the addictive drink on the 25th of October, barely weeks before his mother´s passing on.

Alex Mwakideu clarified that the bottle contents were hot lemon and ginger.

Imagine niliwacha pombe kabisa (I quit drinking completely)… I did it for mom, the last day I had a drink was the 25th of October 2019.

Good Morning! Not feeling so well today. But hey! Kazi lazima iendelee! Say a prayer for your Captain 🙏🏽🙏🏽🙏🏽 In the meantime Niko hapa kukupatia shout out nzitoooo!!! Unaskiza ukiwa wapi???

Fans applauded him for the ´brave´ move that took him 18 years to make, while others did what they do best, troll.

To emphasize on it further and to commemorate a heroine he lost too soon – his mother – the radio personality penned: 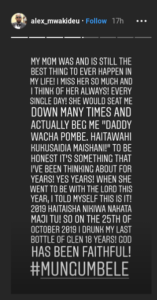 However, he clarified that quitting alcohol is not the end of his fun times. If anything, he hangs out pretty much with is friends, but opts for hot lemon or plain water, instead of alcohol. 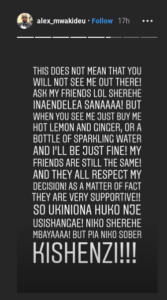