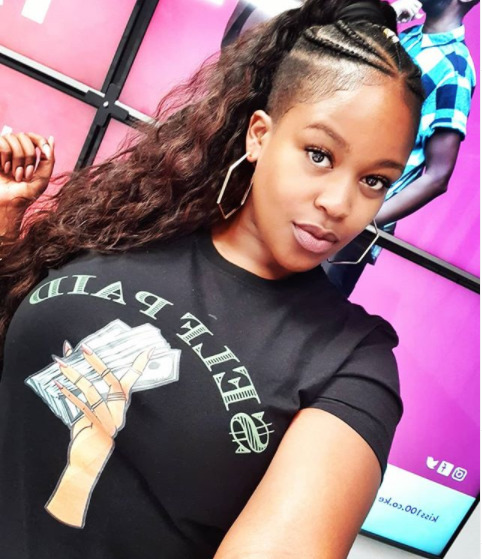 Well, out-spoken radio queen, Kamene Goro was out to share her HIV test results with fans online, but it has now turned into a heated debate.

With her test result up, she simply captions:

Yes, it turns out negative however numerous the string of men she has been involved with.

But that´s not the gamble here. The debate comes in when Kenyans flock her page and comment:

Would you have shown it if the result was positive?

Another fan decided to try his luck:

And having had enough of repeating the same hing, Kamene comes out loud:

Fans become insistent and push Kamene to the edge, posing:

Go for confirmatory test don’t be that sure

This pricks Kamene´s skin a little harder and firing back, she irately responds:

@morriekalani you think this is the 1st test I’ve taken. Some of us are very diligent. It’s called discipline, so chill. I’m well informed.

The Kiss 100 presenter decided to set things straight to her online fans and in a short clip, she calls out Kenyans for being one of the most highly educated yet ignorant society in the whole world.

According to her, fans misinterpreted her intentions but she clarifies that her message was simply ´Get Tested´.

C´mon, you can´t be that shallow-minded. We can´t afford to be that shallow in our thinking guys. Have you gotten yourself tested? That´s the most important part. Aaah! Mnanichosha!

A lesson well and deeply learned this weekend, Nobody can safeguard your happiness better than you, therefore you must guard it selfishly, without question or compromise. Your happiness belongs to you!

Unfortunately, her public rant did not serve any good as fans came out bashing:

Very insensitive to post a negative result. Should of taken the picture before the result appeared on the strip or taken a picture of the kit,that would of sufficed to get the message across. Maybe the intentions were good hearted but the execution couldn’t of been more flaud. This is a sensitive matter and frankly a private one, and those out there who are positive don’t need a constant reminder of their condition by people rubbing it in their faces by flaunting their negative results. The correct message should of been that off awareness and privacy.

This is my take. When you are in a position to educate people on issues that pertain to them and the society shuns upon, it is an unspoken duty to do just that. But one should do it while taking into consideration the sensitivity of each issue. Be sensitive to those who might not have such a result. Keep it on educating people. Whether you are safe or not does not bear weight on the unsafe. Educate everyone as an equal.

Yes we have so many tyms kwanza me I do it once in every 3months and after getting the results I usually throw tht kit in the garbage bin,we don’t show off.okie wht was the reason behind posting it for the public to see.

@royalgift96 you are exactly the person I’m talking about. Ignorant! Jesus!

@kamenegoro babe don’t struggle… You inspired someone to go test. That’s great keep doing you and leading from the front

those are people with small minds don’t mind them gal.and this was your choice not theirs

What is wrong with our society. The point across is knowing your status. The people who wrote such idiotic comments are the ones who still place a stigma on HIV+ people. We have a two months in this decade for crying out loud. People need to get their act together. Such average thinkers lead average lives.

While others bashed each other:

@mnksydney yoh am not trying to look for fame or followers ova hear,so just stay on ur lane u “gilipollas cabron”..

For those who were here to watch:

Can we just be better???