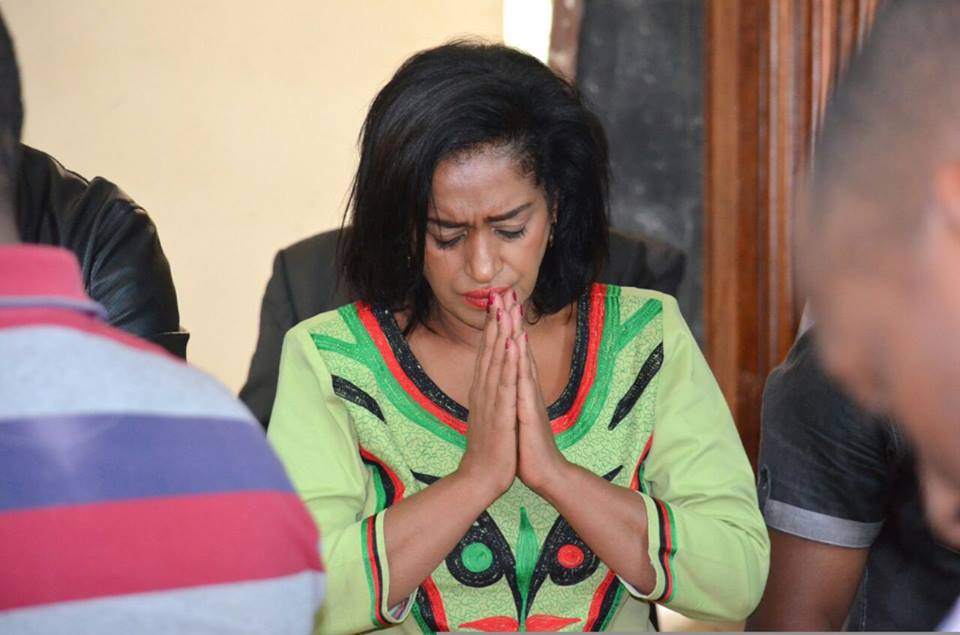 The words that were uttered by Nairobi Women Representative Esther Passaris have left many people on social media trembling in fear.

So on Monday September 11th former Machakos senator Johnstone Muthama was arrested over hate speech. Nasa allied politicians went to Pangani Police Station to bail him out, Esther Passaris was among those politicians.

But unfortunately she was not ‘lucky’, her ethnicity betrayed her that fateful day. In an audio doing rounds on social media, Passaris is heard narrating how she had an altercation with a Kikuyu policeman who was irritated because she was supporting Nasa.

“There was this special units guy, they said he’s special squad or something…the guy called Njoroge a brown fella he said I will speak to you later. And I said I am the Women Representative I want to go in, Gladys Wanga had already gone in. And i saw a man that was so angry with me and I am like you look familiar but I don’t really know you. So it started dawning on me that the hate he had for me was am Kikuyu how can I dare be with Nasa. So I told him I don’t understand what your problem is but am the Women Representative open this gate you can’t block me out I have been elected by 800,000 people.

“He refused he said you are not getting in, it’s almost like you will see who I am, you are not getting in. So eventually they brought Moses Kuria and as Moses Kuria’s car approached I thought ok good opportunity I can get in now the gate is opened but this guy had his eyes on me. And he says you are not getting in, it’s like you will see who I am. And he grabbed me…God. He held me, and he fought with me. And he was trying to throw me out, he got the gate locked on my leg. But the way he grabbed me, the way he held me, the way he tried to throw me out I asked myself what’s the point of being a legislator elected by 800,000 people but this policeman can actually grab me and hold me and manhandled me. You know for me it was like an assault.

“I finally broke away, I don’t know where I got my strength from but I broke away and I ended up on the inside. When I ended up on the inside I looked at him but he kept telling me ‘I will show you, you are inside but am still here.’ But am like God what’s wrong with this guy. Then somebody whispered to me and said ‘be careful, he is on the hit squad, he’s probably responsible for Msando’s death or he is responsible.’ I just looked at him and I thought ok am going in to file a complaint that he assaulted me.

“So I go in and said to the lady at the counter ‘I wanna file a complaint, I have been assaulted by a cop and she looks at me and says no, I go to the man on the counter and he says no go see the OCS. I go see the OCS and he says go to the back somebody will take your complaints at the gender desk. I go to the gender desk nobody is willing to write down my complaint. I tried that for almost 15-20 minutes, no one was interested and I thought to myself if this is the sign of things to come, we are in trouble. In the middle of the night I saw a message from wakili Oluoch saying he has been trailed and threatened and he’s worried for his life.

“I cannot tell you what I think or know what God wants, but what I can tell you is that God doesn’t want this kind of disorder, this kind of hate. And this kind of government where money is hinged. People are bought, morals are lost, churches are compromised. What’s the point of getting huge donations to build your church when everyone that comes in to that church is oppressed and suppressed. Something is amiss.

“So I will be on Citizen this morning, I woke up at 4 trying to find what I am supposed to say. From my manhandling my  entire body is aching,  I feel like I have been in the gym for after a long time of no gyming. So am aching all over, I just show how much I struggle to get out of this man’s grip. I hear there is a video circulating I haven’t seen it. But I had Maina Kamanda calling me a few hours after I was in Pangani and I told him how could this policeman do this to me. And he said they can do more, they can even remove your nickase. And I thought to myself why, why are we allowing this, he goes ‘we lost the police along time ago’. I go, ‘so what is the government doing about that… I guess the government doesn’t care. Because they need the police to do what they want when they want. So discipline is not something that is important.

“I hope IPOA is going to do something about all the people that lost their lives to the policemen’s brutality including baby Pendo and Samantha. But women we have a big task to talk to our sons, our husbands, our brothers, our fathers. If Kenya goes into chaos, it’s the women that will suffer, it’s our daughters that will suffer. All we ask is a free, fair, credible election. All we see is everything possible to stop Raila Amolo Odinga. Not to compete with him fair and square. And that doesn’t seem right. The president say we will impeach him if he’s elected, shows that intelligence has already told them that Raila will be elected as he was at the first time. What is just, that our children win, or our children compete fair and square. Imagine if it was your son in a race, would you like him to win after he trips the other boy or would you like to win because he won. And to congratulate the other boy for giving him a good run. Tribalism is going to destroy this country, I have nothing but love for every Kenyan from every corner of this country. I know no tribe, I just know a people, a children united with one purpose only; to seek eternal life and shun the devil and his ways. God bless you all,” Esther Passaris said.