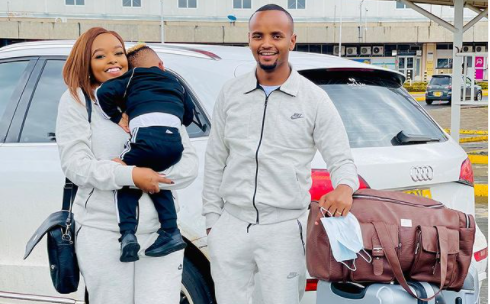 Popular YouTubers Milly and Kabi WaJesus are celebrating their 4 years in marriage today, November 30. The two sweethearts are among the most sought after celebrity couple; each time proving that marriage works. However, they’ve had their ups and downs in their relationship.

For Better Or Worse

One of the most testing time that almost devoured their relationship was during the exposé of Kabi WaJesus.

Kabi WaJesus was outed as a deadbeat father by his distant cousin. Something which Milly wasn’t aware of before the exposé. During the same period, Milly was in tears as Kabi tried to put everything in black and white. A DNA test would later suffice and prove him as the biological father of Abby; after denying her publicly for days. He was compelled to take responsibility, which he’s gladly doing.

Milly forgave her hubby and explained to their fans that she would also be part of Abby’s upbringing.

Anyway, all that matters now is that they’re happy together. On this day, they have penned to celebrate their anniversary;

”God has been faithful to us. We are celebrating our 4th year marriage anniversary and we are so excited we get to do it with the best @bonfireadventures Let’s go create some memories 😍😍😍Travel bags from @denri__africa and of course luku ni @bossman_fpl”