Lupita Nyong´o does it again! 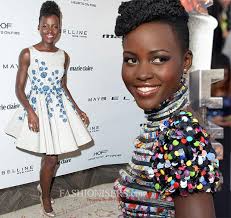 Lupita Nyong´o stars in a horror-comedy, where she plays a Ukelele in ¨little monsters¨.

Lupita Ny´ongo stars as a pre-school teacher who is caught up in the middle of a zombie outbreak and struggles to keep her students alive by singing along ukelele hit songs to keep the students´ spirits, high.

Taylor Swift´s ¨Shake it off¨ is on the list.

¨I love Fraulein Maria in The Sound of Music´ and she is (Miss Caroline is) my Fraulein.¨ expressed Lupita Nyong´o.

The International star seemed to love the fact that her alter ego would sing the ukelele for her students whilst concurrently, dealing with the zombies.

However, before learning to play the guitar-like instrument, she questioned if she would be getting a ¨ukelele-double¨ for the role.

Lupita Nyong´o spoke in reference to her role, on stage, at the SXSW Conference and Festival present with, Abe Forsythe, the film´s writer and director.

¨I even asked (Abe), ´Are you gonna have a ukelele double?¨ said the Black Panther star.

¨I told her, ´No, you can win an Oscar, you can learn to play the ukelele´¨ came in Abe.

Lupita Nyong´o actually revealed that the song ¨Shake It Off¨ had previously been of help to her through ¨a hard time professionally¨ when she was having a ¨funk¨ in her professional life.

This was until one of her friends played her the song and she could not help but dance to it, which was quite a relief to her.

¨I was going through a hard time professionally, and I was just in a funk. I was working abroad and my best friend came to cheer me up. He played ¨Shake It Off¨ on his phone and we just had a dance party in my bedroom¨.

Furthermore, Lupita even went ahead to get the 29-year-old songbird, Taylor Swift, to personally clear the track, for use in the ¨Little Monsters¨ after the team behind the upcoming horror-comedy found it a struggle to access the rights.

The 12 Years a Slave star, added, ¨It meant a lot to me that this film had that (song). And so when I heard that they were having a hard time (accessing the rights) I wrote to Taylor Swift herself and asked her and told her that story.¨