“Marriage is starting to feel like a lot of work!” DJ Mo giving up on wife, Size 8? 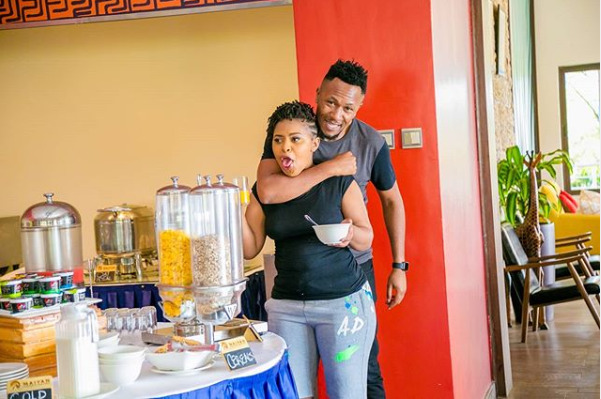 Barely 2 months after Size 8 complained about her sex life with DJ Mo; the couple is back with yet another drama aired during their Dine with Murayas show.

This time around DJ Mo complained about his wife nagging the life out of him! According to the gospel DJ his wife can’t go an hour or two without calling him non stop.

For this reason, Baba Muraya Jnr now feels that his marriage is somehow not working; all thanks to his wife’s nagging behavior.

Do other men go through the same thing ama ni mimi tu? I was telling a friend of mine that marriage is starting to feel like a lot of work.

In her defense Size 8 says she has her own reasons as to why she keeps calling her man whenever he steps out. Unlike most women, the mother of 2 admits to being insecure which then leads to trust issues!

The reason why I call him that much is because I have my own reasons. The truth is I have been doing all he is accusing me of. There are times when paranoia, lack of security and lack of trust hits me.

Judging from some of the things the two brought up during the show, it appears that all is not well! At some point Size 8 shares her fear of having to go through a divorce.

The singer goes on to open up about sleepless nights now that her heart is not at peace. She goes on to add;

I was not calling him to offend him. Sometimes my heart is not at peace. I love my husband and the thought of divorce is giving me sleepless nights and I do not want it in my house.

But really, can a nagging wife lead to a divorce or is there more we still know nothing about?

Why Phil Karanja has left many women envying his wife, Catherine Kamau (Photo)