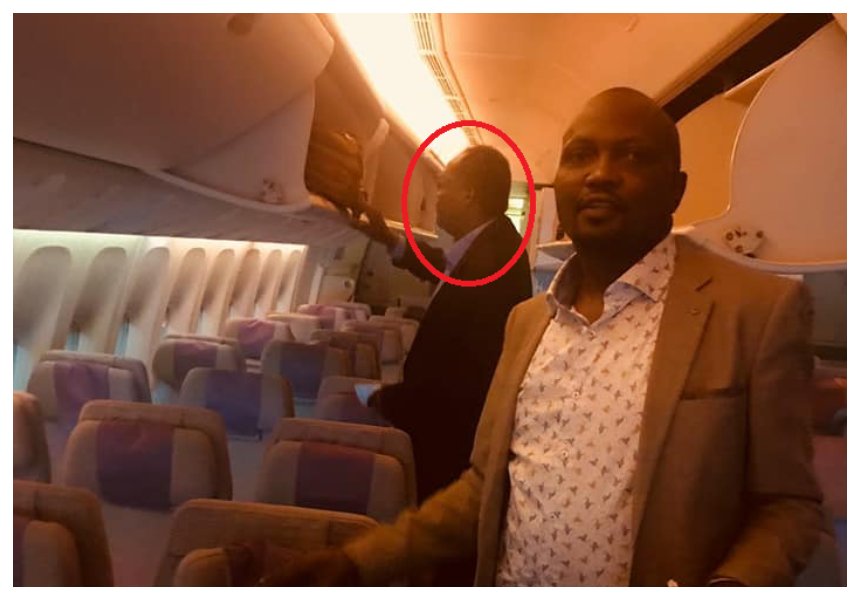 Moses Kuria was in the same plane that Miguna Miguna was bundled into and deported to Dubai. The Gatundu South MP recorded Miguna as he clashed with U.A.E officials in Dubai.

Miguna Miguna was on Wednesday night deported to Dubai despite a court order requiring that he be released and produced in court on Thursday.

Miguna’s lawyer Otiende Amolo says his client was forcibly put on an Emirates EK 722 Dubai-bound flight at around 11pm.

Miguna revealed on social media that he was drugged and assaulted before being forced into the Dubai-bound flight. He says his ribs are hurting.

“I was dragged, assaulted, drugged and forcefully flown to Dubai. I woke up in Dubai and the despots are here insisting that I must travel on to London. I’m sick. I need medical treatment. A Mr. Njihia is threatening me. I need urgent help here. I want to take a flight only to Nairobi. Nowhere else!
I’m sick. My ribs and body is hurting all over. This is a travesty of justice!” wrote Miguna Miguna.

Moses Kuria was in the same flight that deported Miguna Miguna to Dubai. He shared videos of the NRA general at Dubai airport arguing with U.A.E officials.

“This morning at Dubai International Airport I bid farewell to the leader of the breakaway Eastern Suburbs of Toronto, NRM General Miguna Miguna who completed a succesful 4 day state visit to Kenya. We committed to continue working together to strengthen the relationship between the people of the two friendly nations,” wrote Moses Kuria.