Nadia Mukami has given us the much-needed break from twa twa with her 8th single: “Maombi.” This is one song that has raised the eyebrows of the ‘Gospel Police.’

However, since then Nadia has grown to a notable brand.

She has diligently carved her space into the music industry, beating all odds and making it among the best in the country.

With songs such as African Lover, Ikamate Hiyo, Yule Yule and her first mega-hit Si Rahisi; Mukami has always left her fans satisfied.

Maombi possesses some sense of spirituality and more so thanksgiving.

It seems Kenyan artists understand that its not always about chest-thumping but acknowledging God in their journey. 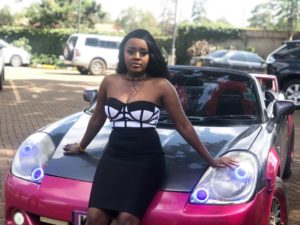 Nadia demonstrates a good mastery of writing lyrics as shown always in her songs and Maombi is no exception.

The song is well written and delivered with ease. It is a thanksgiving song acknowledging God and how He has stood by her.

The song also depicts the negativity that people around us can put in us if we are not careful and focused on what we really want.

Well, it is a song that totally explains the goodness of the Lord and his faithfulness if you keep praying and focusing on what He is doing in your life.

I mean people always talk no matter what you do. Do you!!

This being a thanksgiving song and acknowledging the goodness of the Lord, one would expect to see opulence and affluence in the video. Posh cars, houses, gardens, neighborhood.

Nadia, however, chose the ultimate form of sophistication; simplicity. The mix of color is also a plus for this jam.

It has simple scene settings, no video vixens but just her beautifully delivering the song without much fuss.

This song comes across as a lot better than the songs that are produced with the label ‘Gospel’ attached to them. Some artists in the Gospel industry should see Nadia with a pen and notebook ready to take notes because though simple, she has a lot to offer.