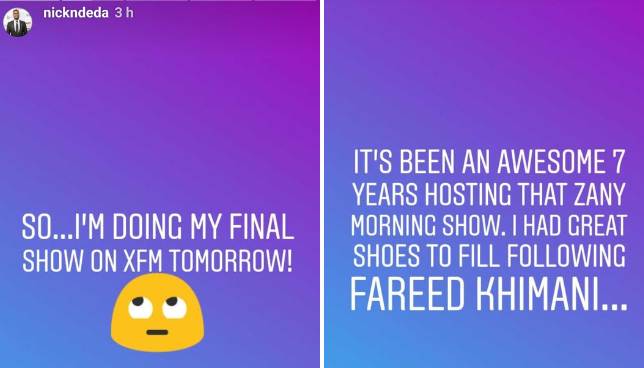 Radio Africa Group´s, Nick Ndeda hang up his headphones, a huge blow it has been for the radio station, XFM.

Nick Ndeda has since time immemorial been a favorite among many youthfuls and one for his employer station too.

XFM´s fans can sure back up this sentiment for Nick was the presenter all yearned to listen to.

One would easily have Nick Ndeda´s show time spared on their busy schedules.

´#GoodThingsAreComingSoon´ is one of the hashtags, Nick Ndeda posted on his Instagram page.

We do wish him well.

Nick Ndeda was known for his XFM ´Weekly Top 30 segment´ and ´X Breakfast´.

It was through his Instagram account that he informed his fans and followers that he would be exiting his 11 years on air.

¨So, I am doing my final show on XFM tomorrow.¨

¨Tomorrow, let´s do it one last time!¨ and that is how he waved ´being on air´ at XFM, Goodbye.

His last show would therefore be on the Friday, 15th of March.

Nick´s voice had been up on air for a solid 7 years, holding his position as one of the best radio presenters at XFM.

¨I had great shoes to fill following Fareed Khimani.¨

He had taken over Fareed Khimani´s show time or slot at XFM.

A position he faithfully and enthusiastically delivered on, with dedication.

The XFM radio presenter might not have hinted his next move but judging from his post, all seems to be well.

The young and talented media personality is also a theatrical performer, a polished one for that matter.

He has made couple of appearances in a number of local and international productions, never disappointing.