A war of words ensued between Winnie Odinga and Polycarp Igathe after the latter exposed tribalism at Mama Lucy Kibaki Hospital.

On Tuesday Winnie Odinga took to Facebook to narrate how her driver was turned away at Mama Lucy Kibaki hospital. Raila’s daughter reveals her driver was taken to the hospital after police shot him on the head with teargas cannister at close range.

Winnie Odinga says that hospital attendants at Mama Lucy Kibaki hospital turned her driver away because he was rushed there by men wearing ‘resist t-shirts’.

She claims that medical practitioners at Mama Lucy Kibaki hospital refuse to attend to her bodyguard stating that they don’t treat Raila’s people there.

“Today my driver John Ogwati was shot in the head from close range by a Teargas launcher. After falling to the ground he was then trampled on. He was rushed to Mama Lucy Hospital by friends who were wearing “Resist Tshirts”. The staff upon seeing this group, which included John bleeding profusely from his head, informed the patient, “we don’t treat watu wa Baba hapa.” He has since been moved to another facility. (Two other patients who were injured by police and taken to that facility were also chased away.)” Winnie Odinga posted on her Facebook page. 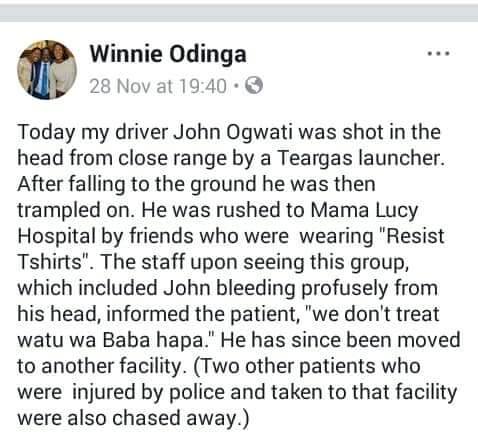 Polycarp Igathe however says that Winnie’s post was meant to trigger violent protests against the hospital.

The Nairobi deputy governor claims that Nasa patients were treated for free at the facility. He says Winnie is lying about the whole incident. 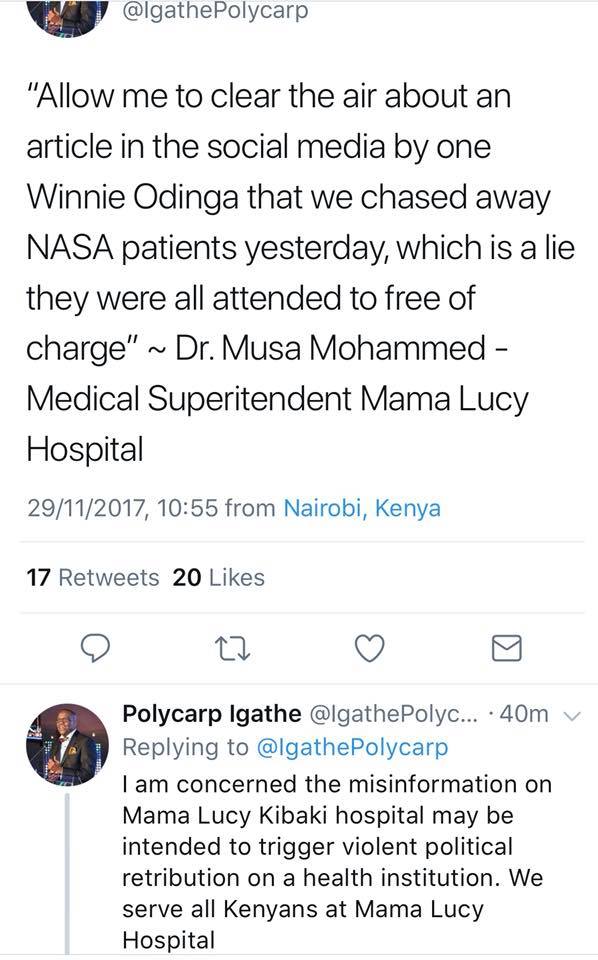 “Allow me to clear the air about an article in the social media by one Winnie Odinga that we chased away NASA patients yesterday, which is a lie they were all attended to free of charge” ~ Dr. Musa Mohammed – Medical Superitendent Mama Lucy Hospital,” Igathe said in one of his tweets. 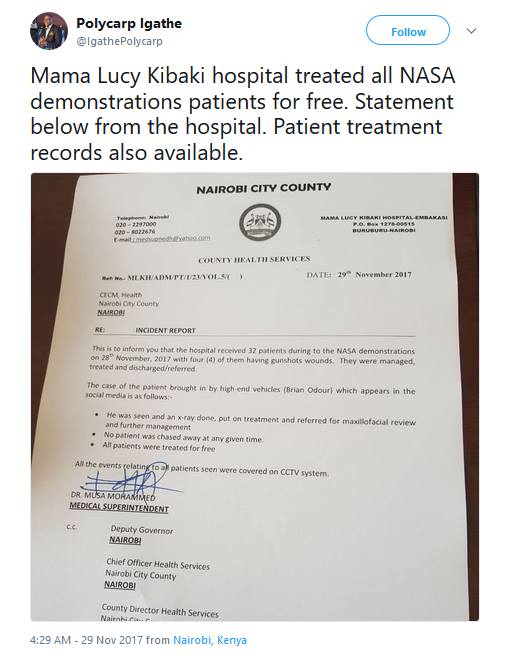 Winnie fired back at Igathe saying that he was peddling lies to cover the unfortunate incident at Mama Lucy hospital. Raila’s daughter further says she has evidence of a transaction to prove she paid medical bill for her injured driver at Metropolitan hospital BuruBuru.

Winnie took her driver to Metropolitan hospital BuruBuru after he was turned away at Mama Lucy Kibaki hospital which is a public hospital.

“Bwana DG, Unless Dr . Muhammed is also the superintendent at Metropolitan hospital BuruBuru and unless he entered my phone and sent money for the hospital bill I’m saddened to inform you that his attempt at calling me a liar has failed! The hospital discriminated. Deal with that, not with me! (No further questions)” wrote Winnie Odinga.