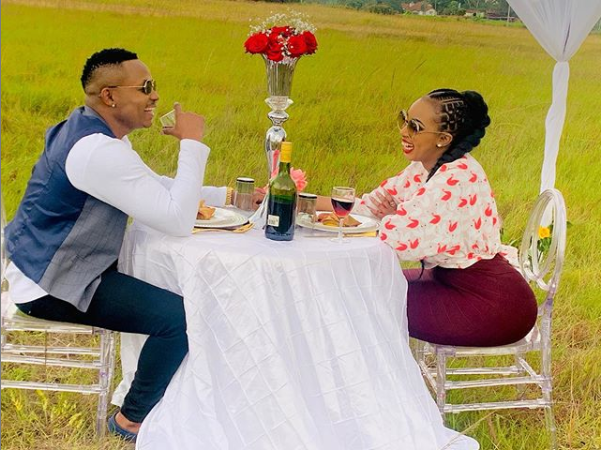 Good music has its demands. And for it to sell and give returns to its makers then flavor and its appeal to the audience are key factors.

However, this needs to be approached with caution and tact. Secular music poses much more challenge unlike the gospel industry.

With secular comes a bit of sexiness, some romance just to say the least.

As Otile Brown is trying to blend it all in, he either just misses something or he gets carried away in the process.

Well, in an online video, the musician is spotted in bed with curvy Kenyan socialite, Amber Ray.

Otile is dating Ethiopia´s Nabayet and the two seem a perfect fit for each other. He might not be dating Amber Ray but the romance in the video is just at another level.

We can visit our past and learn from our mistakes or tune in to the good memories and empower our present. The only thing we need to be careful about is that we don’t live there…. good evening my peeps. #amberthebrand Outfit @against_allads

Furthermore, the ¨Just In Love¨ founder shared a video of himself cuddling and getting cheeky with the socialite who was lying in bed.

To top it up he captioned:

The video has since attracted mixed reactions from Kenyans and the world at large, getting us more confused of his intentions.

A coin has two sides and while one side believed it is a glimpse from behind the scenes of the footage of his upcoming music video, others think there is more to it than meets the eye.

Otile Brown´s new video release could be featuring the sultry model who has been his die hard fan since time immemorial.

However, Amber´s history with men negates fact that she might not have any deeper intentions with Otile Brown.

Back in 2018, she hit the headlines with claims of being a husband-snatcher to rapper, Syd.

Amber went ahead to tour in Santorini where she featured in one of Syd´s music video.

Speaking from experience, I have felt pain and love, bliss and depression. I can tell you this: You can go back and forth between them often. One day you can feel like a champion and the next like you lost a championship game. Don’t think just because you are sad or depressed that it will always be that way. And when you’re winning, be sure to value and appreciate that moment too. Life is about seasons , and everything changes … everything evolves in life. #amberthebrand Special thanks to @instylekenya for my shoes.

❤️,but i guess you guys are just shooting a video😂

Is this what it means by ‘chinja bata kuku aone wivu??? “

They are eating each other,hehehe