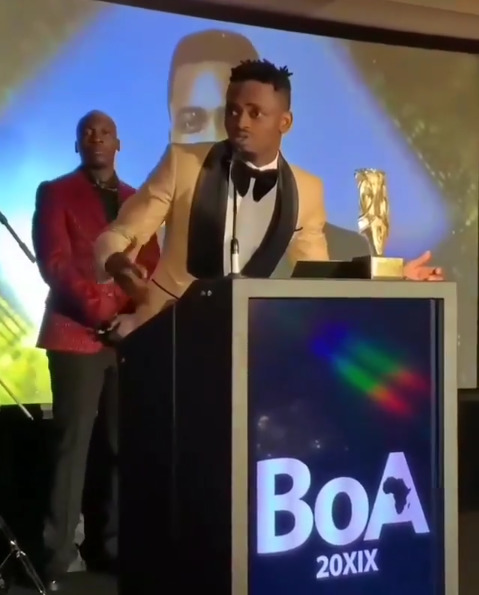 Woe unto you if you grace the world of fame and are not able to express yourself in commonly accepted International languages. Like the Queen’s language.

Tanzanian star, Diamond Platnumz fell victim of such. The bongo flava artist has been exposed to the bongo language since his childhood and has stuck with it to date.

However, he doesn’t expect to bag International awards, away from his motherland and still express himself in Swahili.

This is where knowledge of English comes in handy. The Wasafi President was out to receive International recognition under the ‘Best of Africa Awards’ category.

An event that took place in London, the British Kingdom. Like we’d all expect, English carried the day.

Am so delighted and honored to receive a Philanthropic Endeavour Community Action Award….Thank you so much @boa_awards for the recognition, Let's continue Empowering and Uplifting our fellow youth, to create a better future for our Africa Continent and the World 🙏🏼 #boaawards2019 #BoaAwards @nglkante @wilfriedzaha @stormzy Suit- @speshoz

So Chibu is called upon to receive his award, which he does diligently but then he has to give a brief speech. And that’s where it gets tough.

He addresses the BOA awards, reminiscing days he started off from nothing and his belief is ‘dreams are valid’ for all who have talent in music.

Yes, message delivered but the struggle that came with it, is what has sparked social media uproar.

Fans took to social media to commend him for a work well done but still laughed their hearts out as he struggled with the Queen’s language.

Uweeuh am sure his tongue was vibrating and had tingling sensations all night after hii rusungu yote his head must be spinning from cramming these lines all week. Good job Tanasha  imagine a whole night of no swahili

But diamond knows English, what type of fans are you jamani. Hamjaskia akiwa interview before. Anyway Kenyans should know that English is not a measure of intelligence but just a language

Platnumz received a Philanthropic Endeavor Community Action Award, thanks to his massive contribution to society.