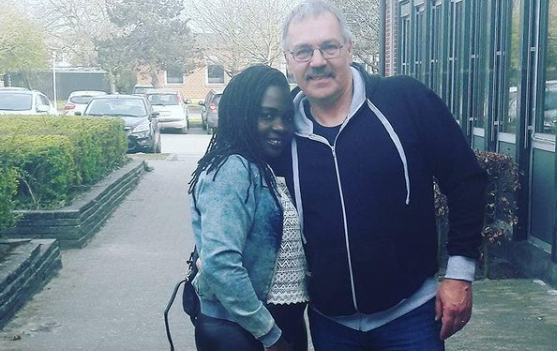 Nyota Ndogo learnt her lesson the hard way after playing a prank on her hubby and putting her own marriage on the edge. After months of her hubby being silent, he finally responded to Nyota Ndogo’s plea.

Nyota Ndogo’s relationship with Henning had been criticized by most. Some believe she’s just after the man’s money; but Nyota Ndogo disclosed she can cater everything for herself.

She was also discouraged and told to move on and let him be. ‘He’s too old for you anyway’, they said.  But Nyota Ndogo wasn’t ready to give up the love of her life.

Till Death Do Us Part

The attachment she had on him made her to even go ahead and leave the country to get her hubby back.

The two sweethearts might be back together now. Nyota Ndogo has posted a photo with her hubby and shunned everyone who terms him as an old man;

Love knows no boundaries. Despite their age difference, Nyota Ndogo has fought for her love and has gotten him back.

The two lovebirds are yet to have a child together; and Nyota Ndogo doesn’t seem to be in a hurry. We might witness a re-kindled love story with a happy ending.