When I Was Jobless, I Used To Get Wealthier Men, Now It’s Vice Versa- Bridget Achieng

Kenyan socialite, actress and fashion designer Bridget Achieng has revealed how life can turn around in an instant. The curvy socialite had a while back revealed about her struggles when she was a teenager. She revealed that where she lived some years ago, she was working as a house girl.

She used to live in Kibera slums and even shared that she used to pay Ksh 1200 for renting her house. Years later, success has found the socialite who dabbles as a plus size model, entrepreneur and actress.

After all her struggles, her life changed for the better. She has revealed that she used to get wealthier men. After being a boss, things were the other way round. On her Instagram story, she wrote, 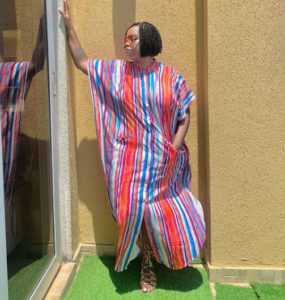 ” When I was jobless I used to get wealthier men and I never thought that well would run dry, when I became a boss I started getting the opposite Wahalla this life no balance at all.”

Besides being a socialite, Bridget is a mum.

The Nairobi Diaries reality series star has never revealed the identity of her baby daddy. However, in a recent interview revealed that her ex-boyfriend dumped her two months after she revealed to him that she was pregnant. Bridget also bleached herself  and always advices women to do the same. She believes that men appreciate light skinned women more than dark skinned ones.

I don’t totally agree with her, not all men would want a light skinned girl.