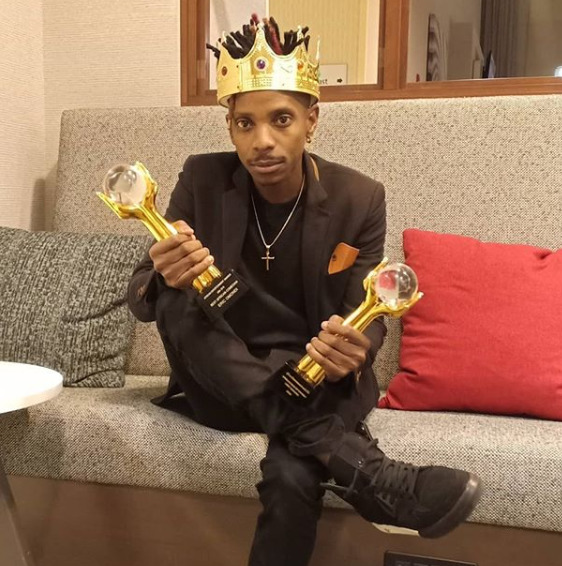 He proclaimed himself the President of Comedy but we thought it was but a comical stunt. Well, Eric Omondi has bagged home two awards, declaring him the best Comedian in Africa.

The PRESIDENT is now KING👑👑👑👑👑🇰🇪🇰🇪🇰🇪🇰🇪🇰🇪🇰🇪🇰🇪🇰🇪
Every Obstacle be it human or object, BOW DOWN🎤🎤🎤
– BEST COMEDIAN AFRICA
– AFRICAN KING OF COMEDY
@aeausa

In a second post, he gives us a closer look into the details engraved on the two awards with one reading ¨BEST AFRICAN COMEDIAN¨. As the other read ¨AFRICAN KING OF COMEDY¨. 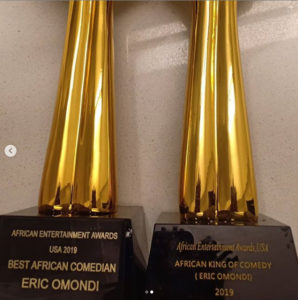 Both 2019 awards that went down at the African Entertainment Awards in USA.

For him, in the end, everything will bow down when your success speaks for itself.

Kenya Stand Up🇰🇪 East Africa Stand Up🇺🇬🇹🇿… The PRESIDENT has left the CONTINENT for NEW YORK CITY!!! The PRESIDENT will be yet again hosting the Annual African Entertainment Awards this Saturday in New Jersey,USA. He has also been nominated in the category for "The King of Comedy Africa" Say a prayer for me🙏🙏🙏🙏. God bless 🙏

And to show gratitude for the massive support Kenyans and the continent at large have shown him, in a short comic clip, he reiterates that his only job is to ¨Make Sure AFRICA LAUGHS¨

I have ONE job only, to Make Sure AFRICA LAUGHS😎😎😎😎🤣🤣🤣🤣🤣🤣🇰🇪🇰🇪🇰🇪🇰🇪🇰🇪 THE PRESIDENT IS NOW KING #MyRulesMyLife #WilliamLawsons

Fans could not help but applaud the young comedy act who has stood the test of time and come out to prove that No Man Is Limited.

Starting with very own fellow comedy acts, to Kenya´s big minds, Eric gets commended for a job well done.

carolradull Well deserved Eric! So proud of your journey 🙏

bonfireadventure congrats bro sky is no limit , discover what is beyond the sky now…..🔥🔥🔥🔥🔥🔥

patrick_salvado Congrats you man, you need to show off those awards when you come back.