Modern Day Sodom and Gomorrah: Inside A Nairobi Gay Club Where Patrons Pay The Bouncers For An Hour Of Debauchery In The Clubs Toilets. 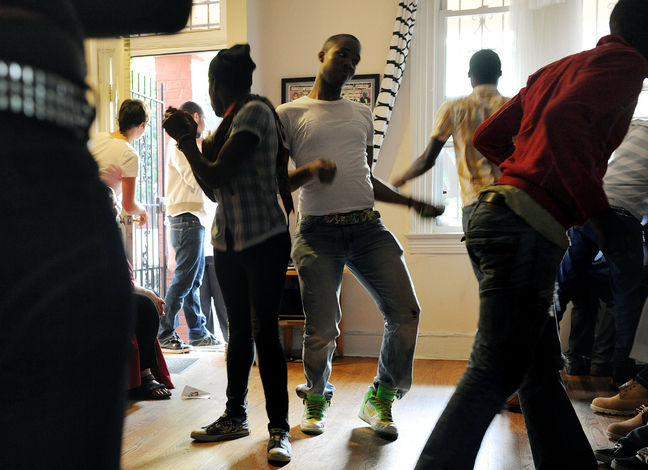 A few weeks ago, we got a tip from a fan about a club in one of the populous Nairobi estates where patrons tip the bouncer in order to have sex in the premises’ toilets.

On Friday, my 3 colleagues and I left for the  joint working in close collaboration with our informer. We got the premises at around 6 in the evening and chose to while the evening away, eating some sumptuous viazi karai at some roadside shack.

According to Tim,our informer, the real debauchery was to be witnessed from 9 O’clock; the time when patrons begin to show up at the joint for tipple and unbridled sex.  Nine soon came, at  the time we had our way well into a sack of Viazi Karai  we left for the joint, our informer in the lead trying to make our entrance as normal as possible.

The door was locked to the outside world;  a lone God-forsaken world which continued to thrive in oblivion of the Sodom and  Gomorrah a stone throw away. We paid our dues,  500 shillings each and got into the den.

The whole place was dimly lit; wafts and wraiths of smoke rising lazily from sheesha bongs and cigarettes . Colorfully dressed patrons seated  around in a circle, like knights at the round table, the waiters were  the real tale, they were dressed in skimpy underpants, their privates showing for all and sundry.

We sat down and got lost in the atmosphere redolent of sweat, booze and cheap scents. A waiter strode to our table, stroking his loins and marveling at it’s size, he made a catcall for Salim (our Social media strategist) asking for his order, appalled at the raunchy display, Salim stared on at the apparition before him tongue-tied;

“You mean Tequila?”  the weirdo quipped.

“Yes, that or whatever”

We decided to order for whiskey as Salim waited for his Tekilla, or Tequilla; by the time our drinks came  an hour had already gone by, it was around some minutes past 10 when Irari suggested we go about the business that had brought us there. I stood up and walked to the washrooms at the far corner of the room. Two bouncers were manning the entrance, when we got to the entrance, they assumed we were a couple too heated to get a room, he took me aside and told me that all the toilets were occupied and I’d have to part with an extra 300 shillings for the joys of using the facilities.

We paid promptly and walked into the washrooms .

Welcome to hell ladies and gentlemen!

By the  sink is a couple kissing, a younger looking guy and man twice his age; both engrossed in the throes of passion oblivious of the two new comers who stand by, rooted in horror witnessing the shocking happenings.

Inside the toilet booths are noises, moans and grunts of people obviously doing more than just toilet business. We sneak a peek; a couple is having sex; humping the nightlife away grunting and screaming, sweating and headbanging.

I realize we need to take photos; evidence of some sort, a something tangible to share with you readers the debauchery that happens in the Nairobi Estate clubs  as you slumber.  Before we even get to whip out our phones and start recording, the bouncer burst in; someone alerted them that we were not usual patrons.

Irari lost his phone that night, luckily I hid mine where the sun don’t shine and was able to survive the frog march to the outside where salim and Joe were waiting of us, struggling not to laugh.

sooner than it takes you to say “Al Jazeera”