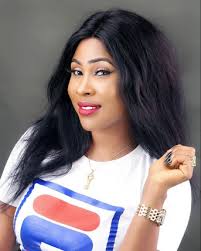 Nollywood actress, Charity Nnaji has been in a couple of scandals over the years, but the last one seems to have hit her so hard that she almost lost it.

Recall that sometime around December 2018, the Dubai based big boy shared a screenshot of his chat with the actress. There, he revealed that the actress, despite her status, had slid into his DM to beg him for money. When he didn’t respond to her, she called him “stingy goat”. 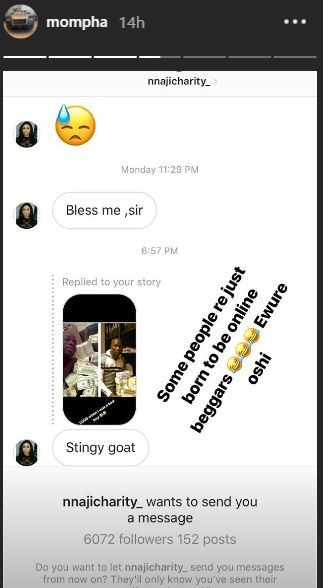 In a chat with Saturday Beats, the actress has finally addressed the issue. According to her, the big boy posted the screenshot to tarnish her image. He didn’t add the earlier parts of the chat, she said as she stated that it was an old chat.

She, however, revealed that the scandal made her last relationship to crashed as a result of the scandal. Her ex-boyfriend felt she wasn’t okay with the money he was giving her, she said.

Excerpts from the interview below;

The man wanted to use that post to tarnish my image but interestingly, I became more popular after that scandal. I made good money from that post because people started supporting my non-governmental organisation. It has deprived me of so many things; I don’t want my past to affect my future.

“I almost drank acid after that post because he didn’t reveal the chat from the beginning. I sent that message to him about two years ago. I was so depressed; I had to stay offline for a while because the insults were too many.

“I am still trying to redeem my image from all these scandals because they have affected my relationship with people. There was a time I was in a meeting with a senator and immediately he entered my name on Google, he saw scandalous things about me. That moment, he refused to even take a picture with me. He was scared.

“The recent scandal about me begging for money online destroyed my last relationship. My ex-boyfriend felt I wasn’t satisfied enough with the money he was giving me. I tried to explain that the chat was an old conversation between me and the man, and that it had happened before I met him. It took me time to convince him. His friends were laughing at him, that his celebrity girlfriend was begging for money online. He said he was sleeping when his friends called him about the story, and that was the end of the relationship.