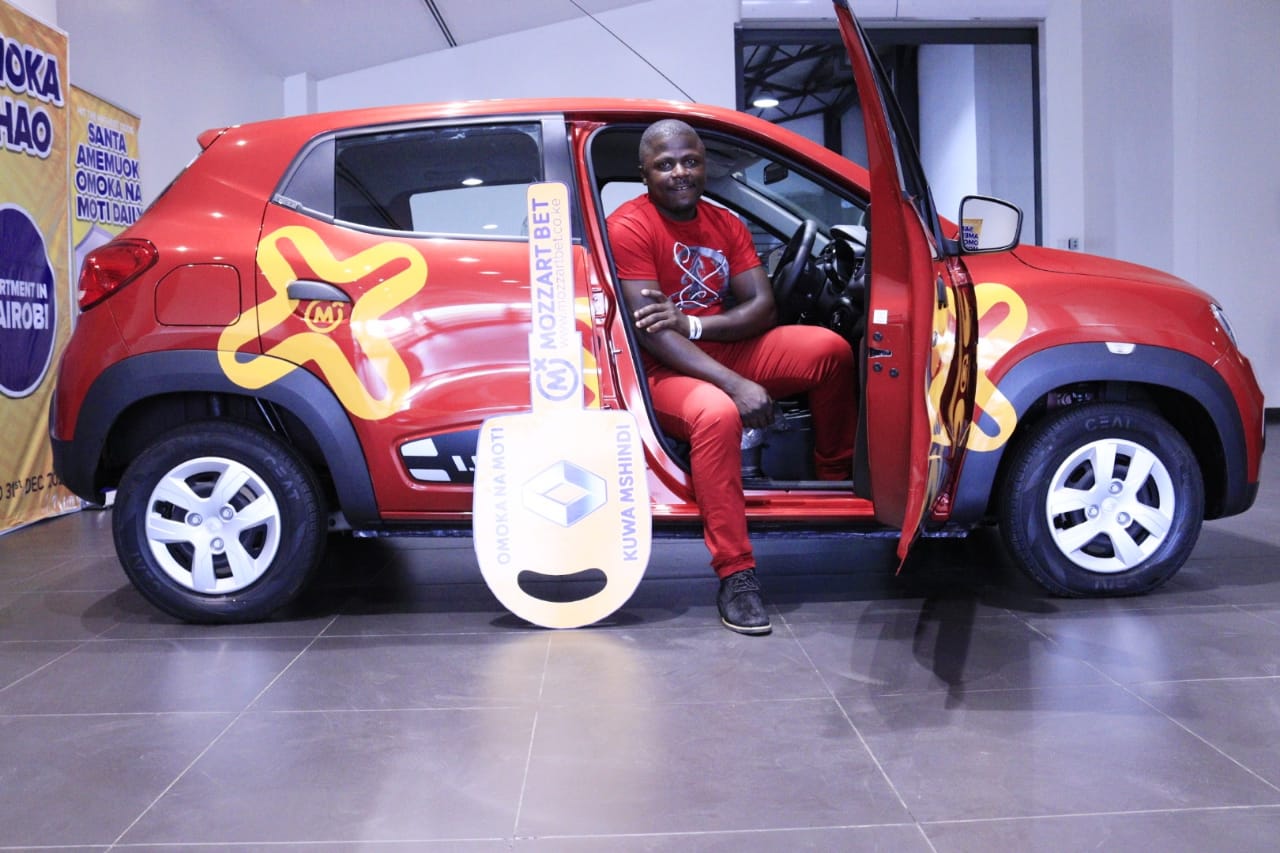 He has been handed the car keys, he has been given the chance to have a feel of his newest prized possession. He is free to drive it home.

But the reality of winning a Renault Kwid, off of a nine-match betting slip courtesy of Mozzart Bet’s Omoka na Moti Promotion is yet to sink in for Duncan Lumumba. 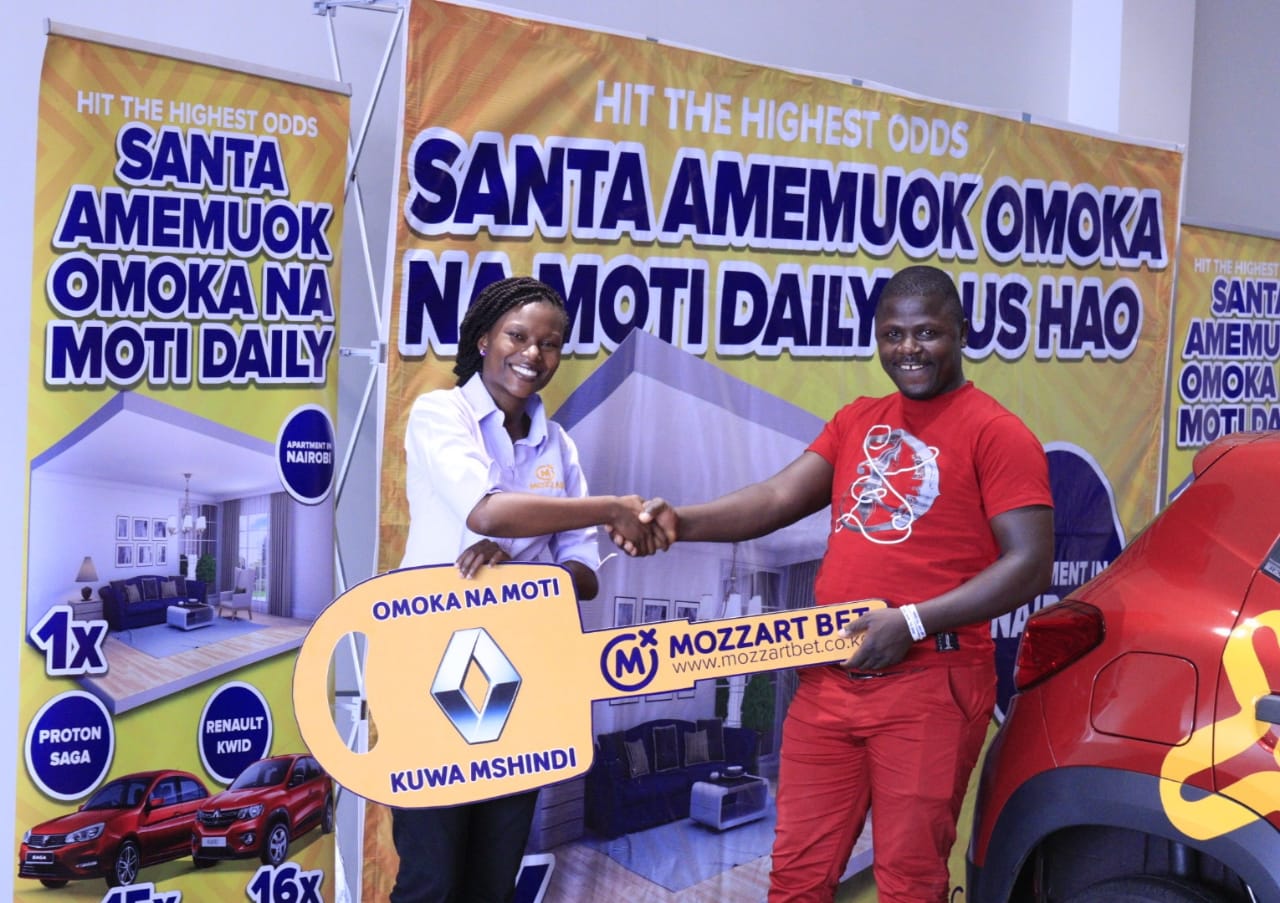 Renault describes the car as an enhanced SUV-inspired design with details and next-gen technology. Bolder, more stylish and well-equipped than ever before.

New signature lighting, a stylish grille and bigger muscular multi-spoke wheels elevate its imposing stance and Lumumba is set to drive his way to car ownership in the said model.

On a normal-looking Tuesday 7 December morning, the 26-year old barber got up to his normal routine of tending to his clientele at the ‘Black Shade’ barbershop at the heart of Naivasha town, but first a quick trip to the Mozzart Bet portal to place his daily Ksh 50 bet. 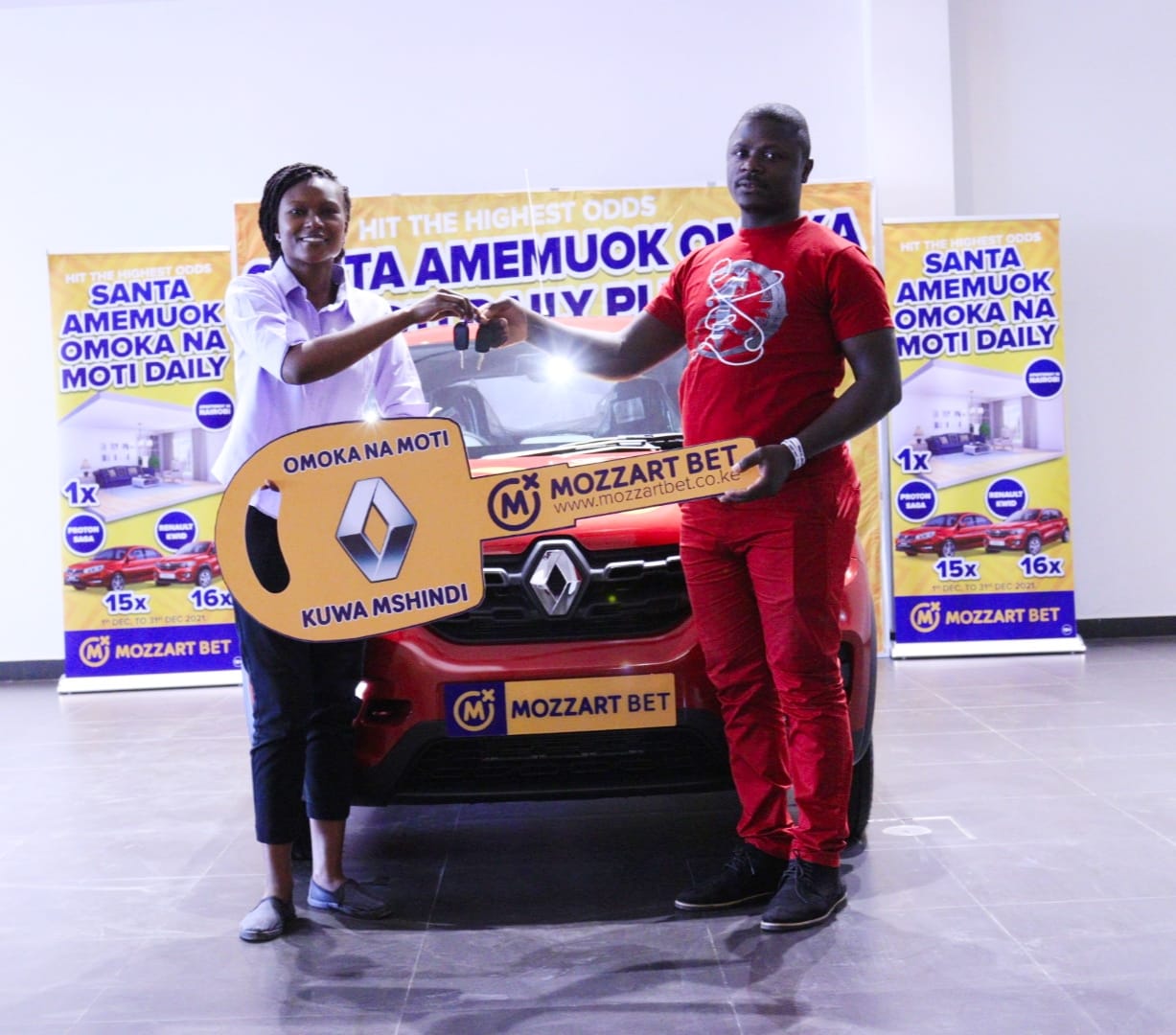 A nine-match slip for 3401.99 odds saw the lucky punter reap big and headline the race to owning a jewel apartment in Kileleshwa.

Maybe he forgot about his bet as he went about his day, or not. But Lumumba went to sleep as usual but was rudely interrupted by his messaging tone from deep sleep on the wee hours of Wednesday morning.

“At 3 am the message came in and my phone message tone is so loud, given the nature of my job, it woke me up. My Tuesday bet slip had won me Ksh 145,577. I never went back to sleep after that. The highest amount I had previously won from my six months of betting through Mozzart Bet is Ksh 15,000. You can imagine my excitement, thinking of how this windfall was going to change my life,” narrates Lumumba.

Armed with a loaded pocket, the second born in a family of four embarked on a journey to Nairobi on Wednesday 8 December as he had a pre-arranged meeting with his youngest brother who is getting settled ready to join college. But the not-so-rude interruptions kept flowing.

“I was to spend the day helping him get settled in then get back to Naivasha. I received a call from the MozzartBet office informing me that I was the winner of a car. I could not believe it. I shared the news with my brother and he too was sceptical. A meeting was set for Thursday at the leading betting firm’s main office and it wasn’t until I got there that the feeling of someone playing a bad joke or a con game on me started fading away. I cannot thank MozzartBet enough. They have changed my life,” said an elated Lumumba.

After getting numerous assurances from the Mozzart Bet office that he was not being scammed and he actually is the seventh winner of the month-long promotion that he has diligently participated in since its launch. 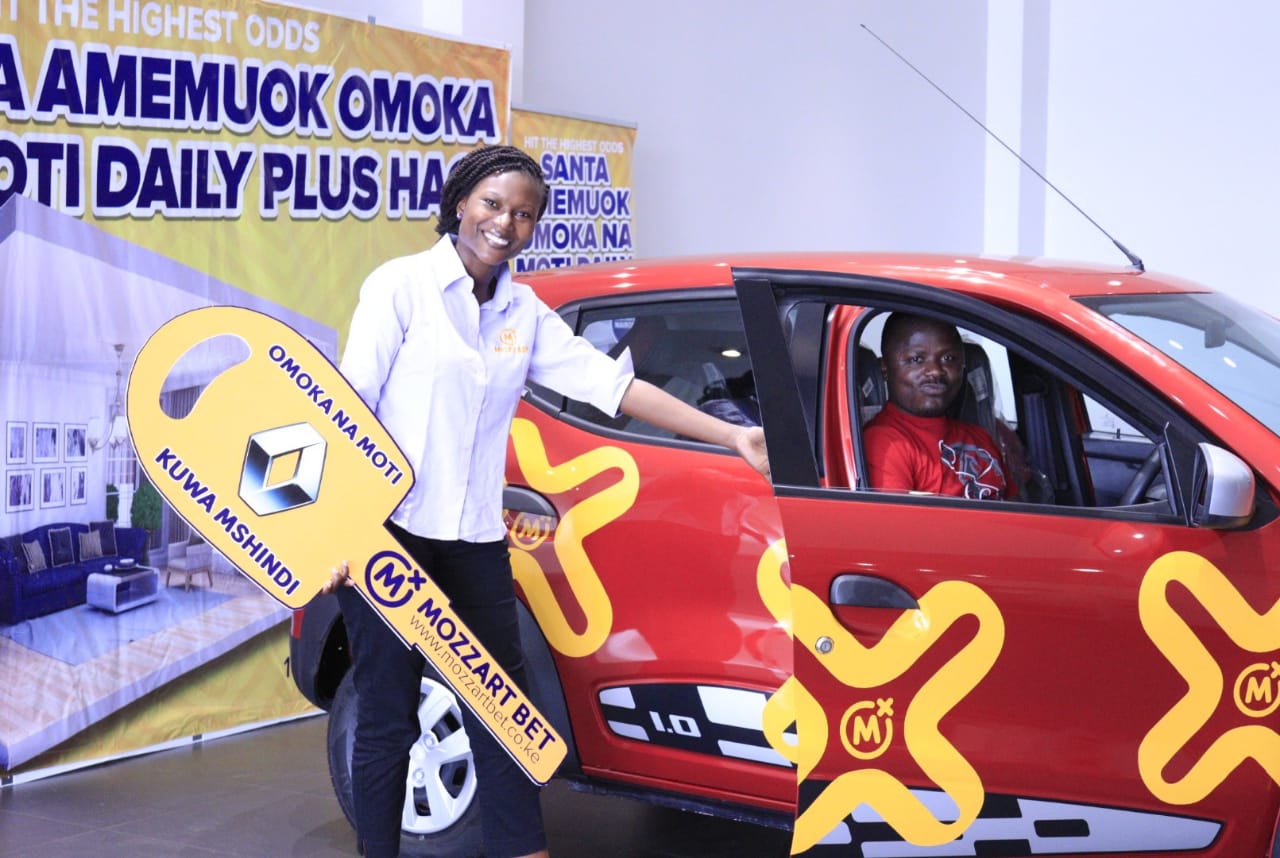 Lumumba is looking forward to expanding his barber business to include a salon and offer more services to his growing clientele.

“It has always been my dream to own a big barbershop and incorporate a salon and that dream is coming true sooner than I expected. The bet slip payout will go towards that. As for the car, I am looking at doing business with it to supplement my barbershop income,” he offered.

How to participate in the Omoka Na Moti promotion

2. The beginning of all sports events on the ticket must not be earlier than 00:01, December 1st, 2021. Otherwise, the ticket is not taken into account. I.e., it does not meet the conditions for participation in the promotion.

3. All bet slips must be from that promotional day. The beginning of the last sports event that is on the bet slip must be no later than 11:59 PM on the day when the bet slip was played. Bet slips that have matches from several promotional days are not included in the promotion.

4. DAILY PRIZE: The winner of the daily prize i.e. the car, is one participant daily who will have won a multi-bet with the highest total winning odds for that day of December, during the promotion. This means the multi-bet must be won in-order to qualify for the promotion.

5. GRAND PRIZE: On top of the CAR, at the end of December 2021, Mozzart bet will also reward only 1 out of the 31 winners who will have attained the highest total winning odds (best winning ticket out of the 31) with an Apartment in Nairobi.

7. The minimum stake on your Multi-bet must be Ksh 50.

8. If a sporting event in your multi-bet is canceled for any reason, odds of 1 are calculated for that event, but the multi-bet still participates in the prize game, but that sporting event is not taken into account for calculation. 9. In the event that the kick-off of a sporting event is postponed, the ticket still participates in the promotion, but will wait a maximum of 50 hours to confirm the outcome of the event.

10. In case that two or more participants have same total winning odds, the participant who paid the multi-bet first, has the advantage.

11. All events on the Bet-slip must be sports events (results of individual or group sports events, a certain event during a sports competition, etc.)

13. One customer can only win one daily prize during the promotion and will be in consideration for the grand prize also.

14. Each player can play an unlimited number of tickets during the period of promotion.