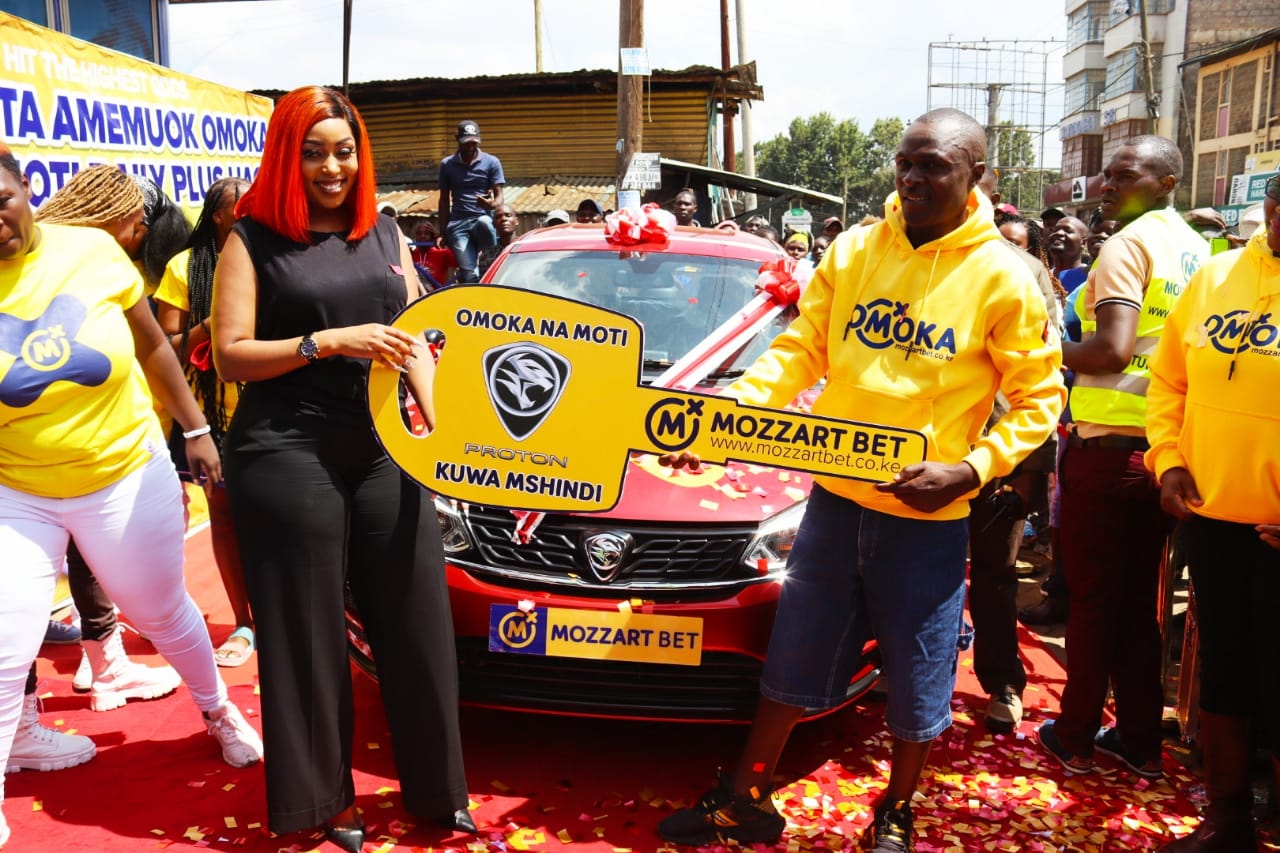 Airo was the 5th winner of the promotion, being the newest Proton Saga owner after predicting 10 games that had total odds of 810.98 correctly. 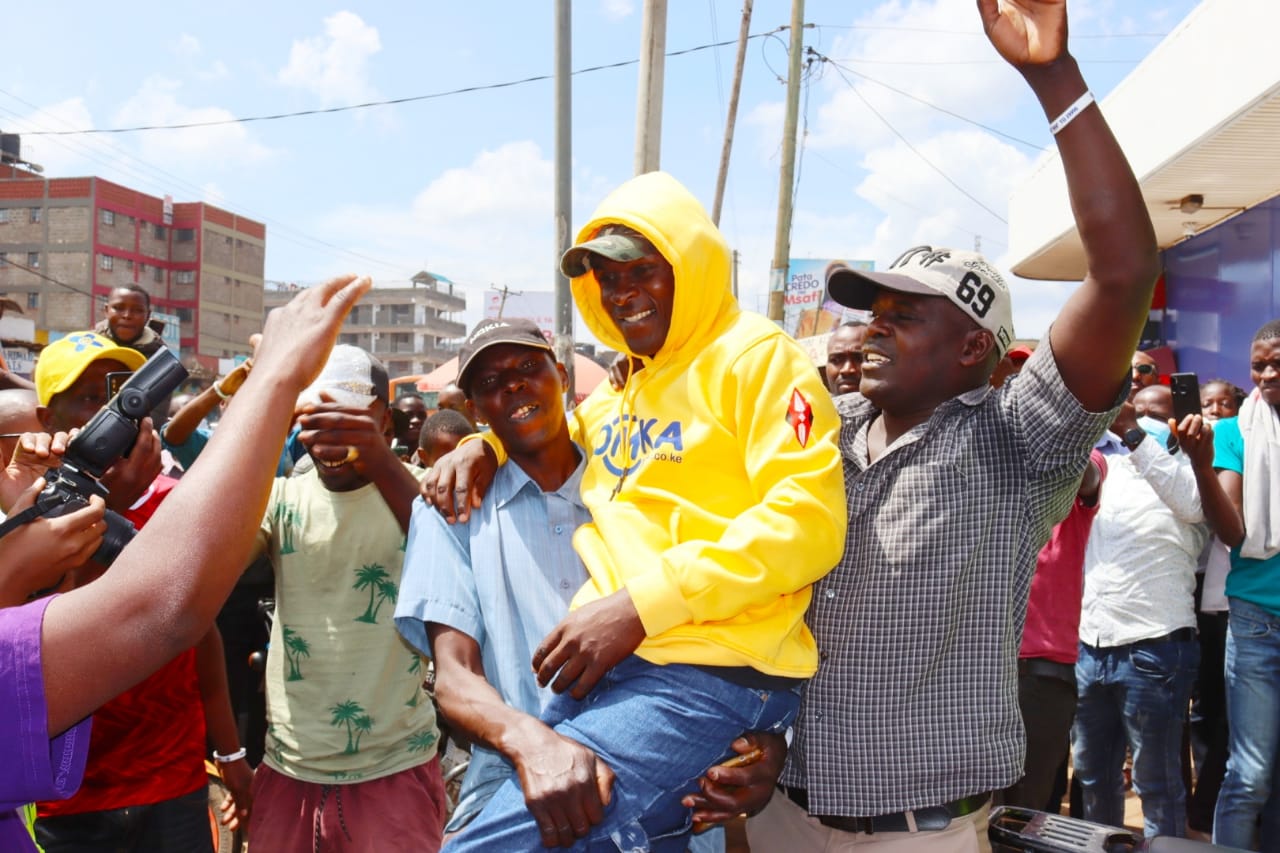 Still stuck to the analog way of having tangible proof, Airo was the first of the winners in the promotion so far to have done so after staking over the counter.

To make it special and memorable, Mozzartbet visited Airo in Kawangware to present him with his car.

He casually placed his bet at the Kawangware Mozzartbet shop on Saturday, as he has always been doing, then went about his woodwork business in the sprawling informal settlement, only that this time his Ksh 50 would come bearing more gifts. 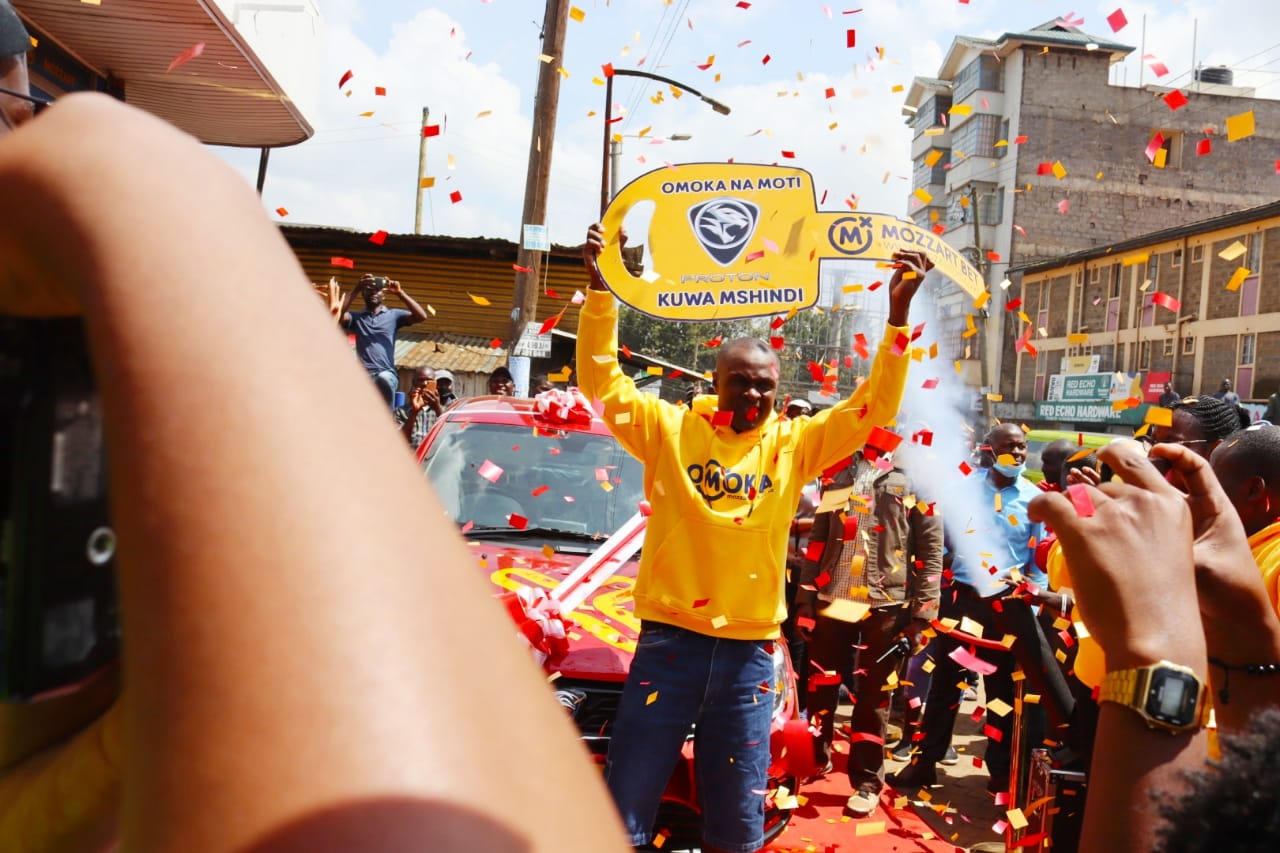 “I feel very good having won a car with Mozzartbet. I have been betting for a while but it did not hit me that there is a day I would own a car from only 50 bob. I will not stop at the car, I will continue betting because I know I can win more than that. Anyone can transform their 50 shillings to a car with Mozzartbet just like I did,” an elated Airo said.

Beatrice Achieng, a cashier at Kawangware Mozzartbet shop revealed that at some point Airo wanted to change his car-winning ticket after placing his bet but was time-barred.

“He comes in the morning, picks the fixtures and goes to analyze then comes back later to stake. On Saturday, after staking he became a bit hesitant on his pick in the Westham and Chelsea game and even wanted to cancel the bet but time did not allow. He wanted to bet on Chelsea as opposed to Westham.” Says Beatrice.

“On Sunday, he came to collect his winnings in the morning and I served him because I was the one at the main counter. At that time, we did not know that he was the winner for the previous day but later the main office called and notified us that the person we had paid was the winner for the day. We counterchecked the time stamp of when we had paid him against the CCTV image and started looking for him, luckily it was easy because there was someone around who knew him,” Achieng narrated. 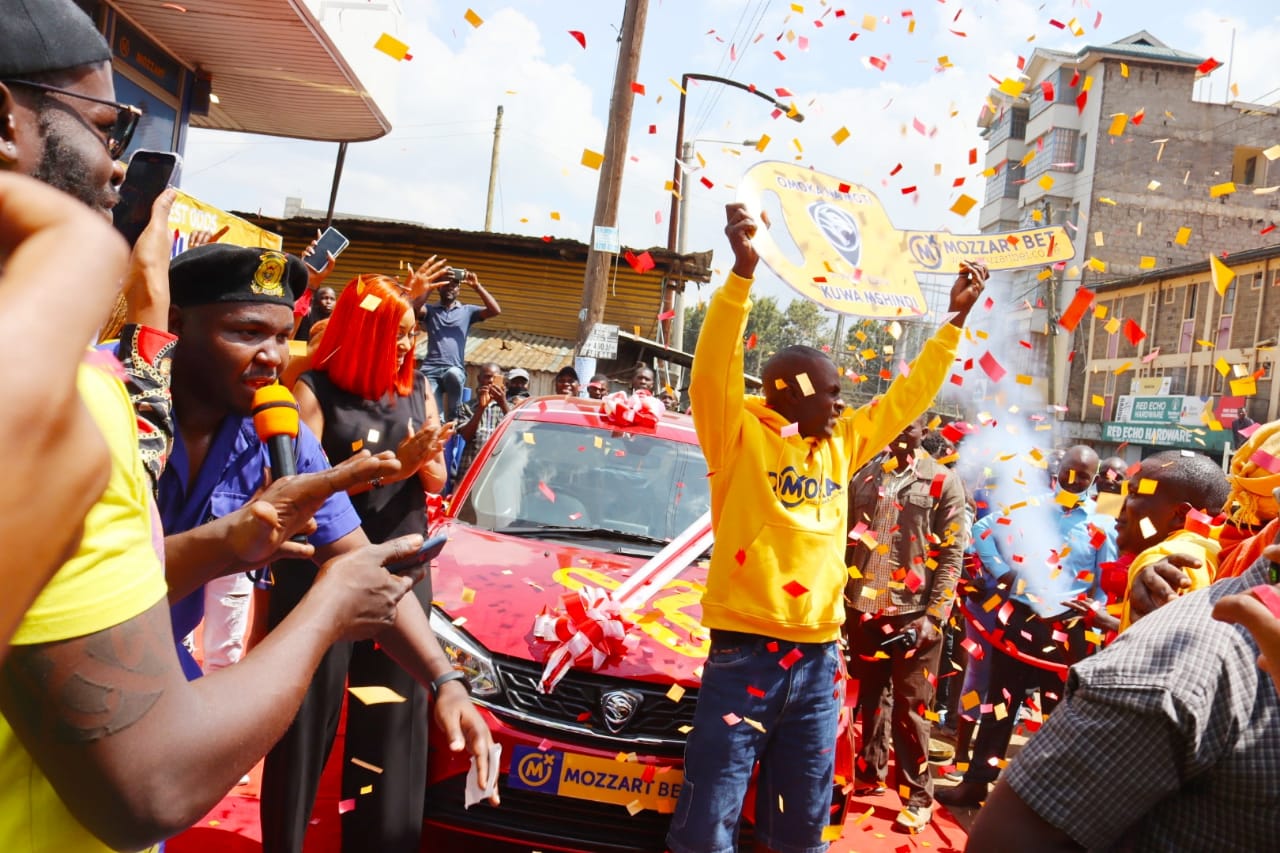 Kawangware Mozzartbet Shop manager Brian Kibichii congratulated Airo and urged punters to continue playing with Mozzartbet now that they had experienced the reality of the promotion in their own backyard.

“You have seen that the promotion is very real and Simo will be walking away with a brand new Proton Saga. You could be the next one who walks away with this car or even the 9 million Kenya shillings house,” Kibichii said.

3. All bet slips must be from that promotional day. The beginning of the last sports event that is on the bet slip must be no later than 11:59 PM on the day when the bet slip was played.

Bet slips that have matches from several promotional days are not included in the promotion.

4. DAILY PRIZE: The winner of the daily prize i.e. the car, is one participant daily who will have won a multi-bet with the highest total winning odds for that day of December, during the promotion.

5. GRAND PRIZE: On top of the CAR, at the end of December 2021, Mozzart bet will also reward only 1 out of the 31 winners who will have attained the highest total winning odds (best winning ticket out of the 31) with an Apartment in Nairobi.

7. The minimum stake on your Multi-bet must be Ksh 50. 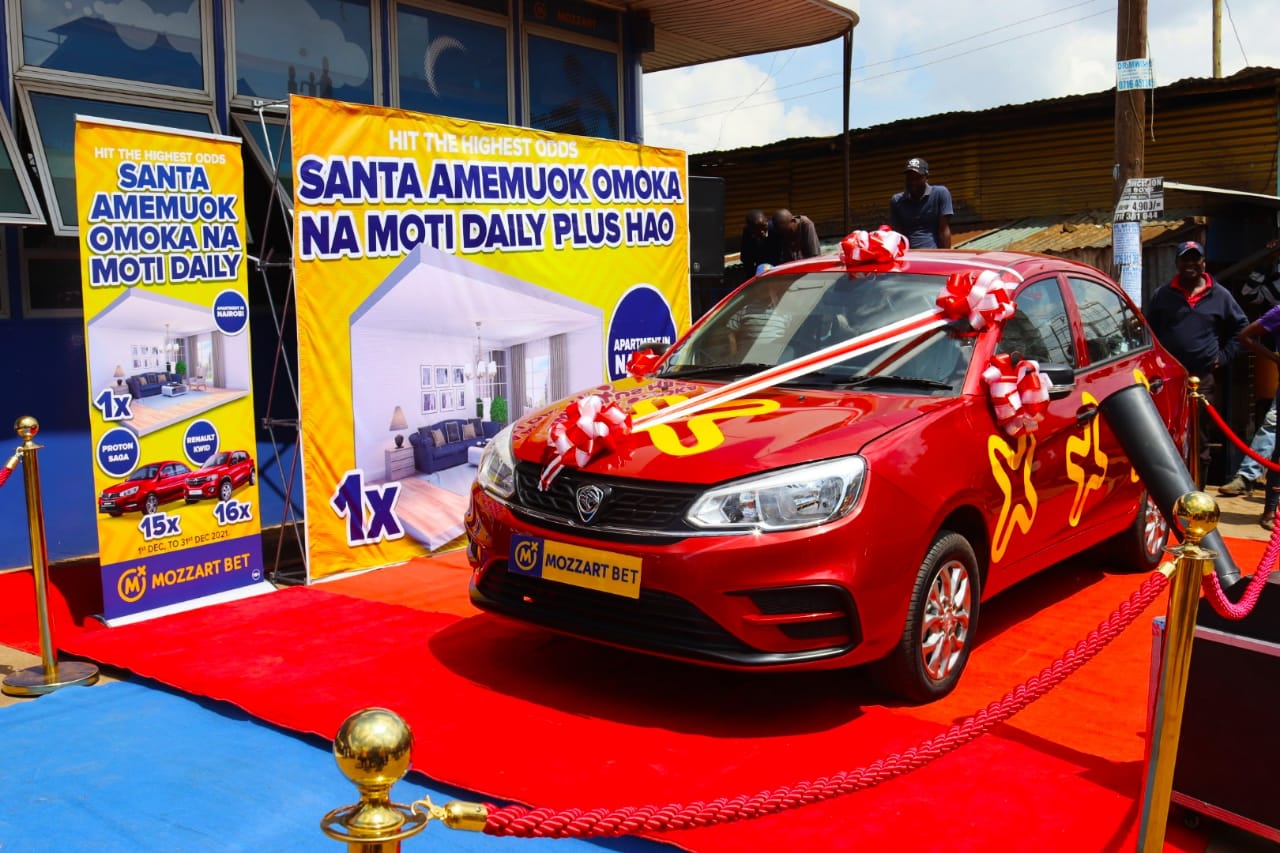 8. If a sporting event in your multi-bet is canceled for any reason, odds of 1 are calculated for that event, but the multi-bet still participates in the prize game, but that sporting event is not taken into account for calculation.

9. In the event that the kick-off of a sporting event is postponed, the ticket still participates in the promotion, but will wait a maximum of 50 hours to confirm the outcome of the event.

10. In case that two or more participants have same total winning odds, the participant who paid the multi-bet first, has the advantage.

11. All events on the Bet-slip must be sports events (results of individual or group sports events, a certain event during a sports competition, etc.)

13. One customer can only win one daily prize during the promotion and will be in consideration for the grand prize also.

14. Each player can play an unlimited number of tickets during the period of promotion.