Things just got thick! These are the nasty things Mitchelle Yola revealed about Prezzo. It’s so bad she had to go and get a restraining order on him 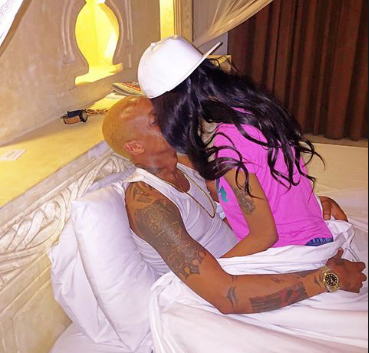 “It got physical at some point but not physical, physical to the point of being taken to hospital” Michelle Yola was yesterday caught on Camera telling fellow Nairobi Diaries cast member Pendo.

She was referring to the incident that hit the interwebs a couple of weeks back that she beat up Prezzo to a point of being admitted at Nairobi hospital.

Also read: He needs to stop now! Prezzo continues trolling his ex Mitchelle Oyola after she accused him of having a tiny transformer….this is what he posted

“Seriously, this small body of mine can stand up for a man like him; beat him to a point of being taken to hospital?” She asks Pendo while defending herself that didn’t happen at all. That’s when she talked about him being violent on her on so many occasions.

Prezzo and Yola during happier times

She also exposed Prezzo’s gimmicks of always remaining relevant. Apparently he has a blogger on speed dial (not me) that he calls up whenever he wants a story out. Most of the time it’s mostly bullshit story meant to paint him in good light while tarnishing her name; he constantly threatens her with the blogger she further stated.

The hospital story was just the last draw for her and she was forced to go and get a restraining order on the guy.

“I just want peace of mind!” She further stated.

She was talking on the premier of Nairobi Diaries Season 5.