He is the Vice President while his father is the President: Meet Teo Nguema, the ultimate African playboy who swims in gold and diamond 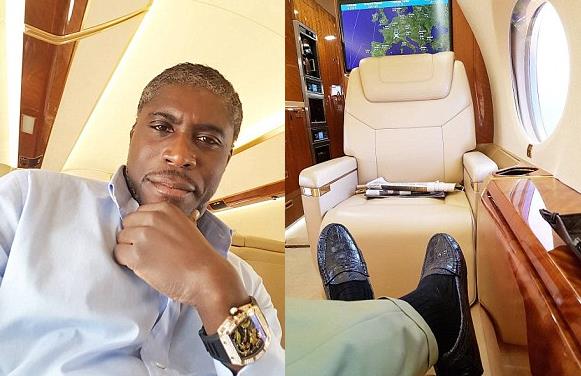 He ferries his glamorous blonde girlfriends around Paris in his fleet of Rolls Royce, Ferrari, Bentley and Porsches. And did I mention he bought the original gloves Michael Jackson used to wear? Teo on his Tron bike Teo’s speed boat being imported to his country Teo in his in a yellow McClaren sport car Teo in his red Aston Martin Teo in his private jet Teo on a big trike Also read: “He Wants Me To Go Back So He Can Eat My Testicles” African President Who Eats His Enemies’ Testicles and Brains Named The Most Brutal Dictator Of Modern Time

The 74-year-old dictator appointed his son as the Vice President in early 2016; prior to the appointment, Teo used to serve as a minister in Equatorial Guinean cabinet. Teo demonstrates his expertise in handing a riffle

Teo is a big time spender; he spent millions to buy original Michael Jackson crystal-covered gloves, socks and shoes which the fallen king of pop wore during his Bad World Tour in 1988. Teo also owns original copies of MJ’s songs. Copies of original MJ records that Teo has The 47 year flamboyant VP is also a seasoned skirt-chaser; he is well known for driving his lovers in a fleet of Rolls Royce, Ferrari, Bentley, Porsches among other high-end vehicles. He also parties with his girls in luxury yachts. Teo at a park in Zimbabwe The Equatorial Guinean VP is on trial in absentia in Paris, Teo has been accused of siphoning off billions from his impoverished country.

His pricey cars and other possessions have been confiscated in France and Switzerland as the trial continues.