Flamboyant socialite Amber Ray has officially been taken off market by Kennedy Rapudo. And it’s not dorky to see Amber Ray in love again after her numerous previous relationships that hit a dead end. You see, Amber is not one to keep her private life under wraps, including her relationships. And this is a probable reason why most of them do not last.

Either way, Amber and Rapudo have shown how immensely they’re enamored of each other. Rapudo went on his knees to propose to Amber while they were in Dubai.

There was a red carpet and lit lamps and candles on the sides leading to an intimate set up where Rapudo could be seen going down on one knee and talking to her fiancée, seemingly asking her to be his wife.

Amber said ‘Yes’ to Rapudo as she displayed a huge diamond ring on her finger.

And to make sure the Diamond ring is legitimate, Amber Ray recently flaunted as it was being tested with a diamond tester.

The socialite claims that even though it was indeed made of diamond, it wasn’t fitting her well enough. That’s why she has to remove it as it gets fixed into her size for a couple of days. 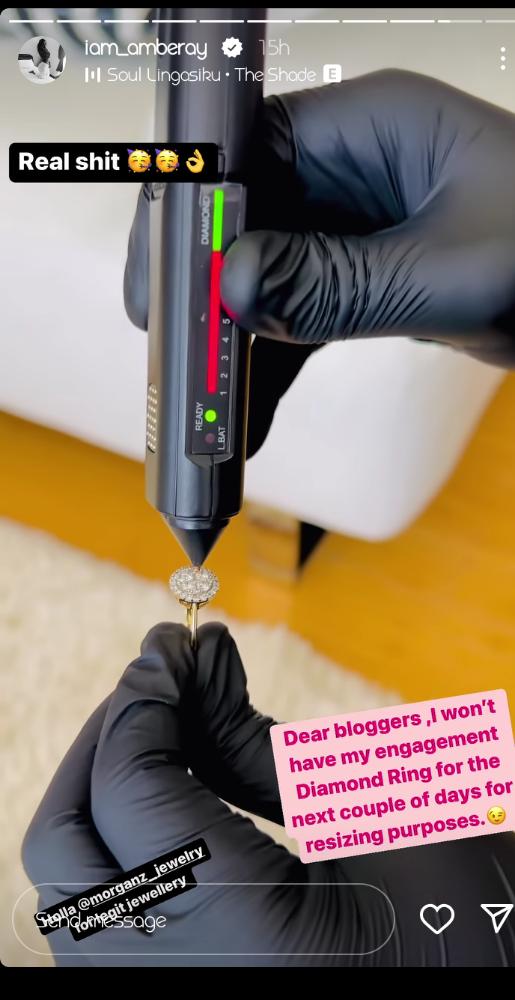 Amber’s engagement means she will be getting married very soon. And fans can’t eschew goosebumps as Amber Ray approaches D-day.