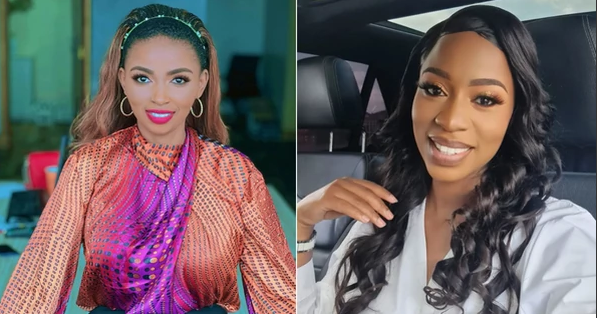 Diana Marua recently left tongues wagging after her revelation that she once dated multiple men for money.

Diana Marua has come under serious public scrutiny after an old video of her narrating how she used to sleep with men for money resurfaced online.

The mother of three, who is known by her stage name Diana B, has been trending at position one on Twitter after her confession video resurfaced online.

Body Count On The Rise

The denigratory fact about Diana Marua’s revelation is she’s already married to Bahati. And netizens believe the release of the video was unnecessary. During her 20’s, she was jobless but was living large.

”Money for me was never a problem and I see people on social media talking about me dating Bahati for his money and all that. Guys I don’t want to brag but let me tell you, even when Bahati met me and we used to hang out, I used to come in different cars. When we meet today I had this car, the next time we met again I had another car and one day he asked me, ‘Where do you get all these cars?’ at that time we had not known each other that much,” she recalled. ”

Upon the revelation, Keroche breweries heiress was among those who criticized Diana over the latter. She wrote;

”Nothing against Diana, I am one of the people who admire her as a mum but why the need to come out right now. Sad truth is that people will go straight to the body count… my point of view is that, I think after being a mother and having a man who has accepted all your flaws, this kind of information should be kept private. Your past sometimes can get people viewing you differently even if it’s to help people and if you really want to tell the story use ” a friend ” as reference, the message will be heard.”

And most fans supported Anerlisa’s sentiments on Diana’s video.