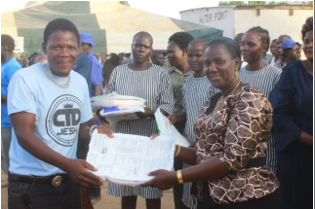 People around the world woke up to a fresh start on 1 January, as the calendars are reset and a new year gets underway.

Burnsen B Initiative is a consortium of friends and artists from Turkana coming together for charity events in the county. For the new year, the team camped at the Lodwar prisons with donations and performances from Turkana based artists including Burnsen B, CID Jeshi, Msumari Ndogo and Chozi B.

The team donated sanitary towels, tissues, soaps, soft drinks and bread to the inmates from different organizations with the count. Apart from putting smiles on their faces through performance and words of hope to the inmates.

Burnsen B the artist behind Burnsen B initiative unloading donations to Lodwar Prisons on Sunday. Photo courtesy CID Jeshi.

“It was Amazing doing this today in Lodwar prison, worth it. This is how I had intended to start my 2023. I feel better and happy always giving back courtesy of Burnsen B initiative and friends coming together.” Burnsen B a musician and event planner said.

“Prisoners are our fellow citizens. They are taken to prison to be shown there is life beyond crime, it is not a death sentence. It felt different and a personal experience interacting with the inmates and our prison officers. I believe our performances brightened their day. Spending the day with them and little resources we had was worth ushering in my new year putting a smile on someone’s face.” Jeshi added.

Burnsen B and Women Representative Hon. Cecilia Asinyen pose for a photo.

The event was graced by the county first lady  Lilian Turkana, County Women Representative Hon . Cecilla Asinyen Ngitit, MCA Ruth Kuya, who is the only female elected MCA in the county and senior prisons officers at the Lodwar prisons. The leaders backing up reforms to better servjces in the prisons department and making it habitable for inmates across the country.