Caroline Mutoko was compelled to eat her words by the no nonsense Kenya Film Classification Board (KFCB) CEO Ezekiel Mutua.

The former radio queen took a swipe at KFCB on a video uploaded on her YouTube channel claiming that corruption and poor policies on the part of the film regulatory body was the reason why a short film based on the life of a Kenyan community organizer – Kennedy Odede was being film in South Africa instead of Kenya.

Ezekiel Mutua was quick to respond to Caroline Mutoko’s allegations with a comprehensive statement absolving KFCB from any blame. Read Mutua’s response below:

I have had time to listen to the commentary by Caroline Mutoko, alleging that a film based on the life of Kenyan community organiser and entrepreneur Kennedy Odede will be filmed in South Africa and not Kenya.

In the video, Mutoko claims the alleged choice of South Africa over Kenya is because filming in Kenya is prohibitive. She further attributes this development to corruption in Government , suggesting that Government officials ask for kickbacks so as to render services.

This is an insult to the diligent and hard working public servants. It’s a demeaning generalisation and a deliberate misrepresentation of facts by someone who should know better.

To suggest that every Government officer is corrupt is offensive and an insult to the public service. Mutoko should therefore withdraw the statement and apologise for making claims that she cannot corroborate with evidence. Not every government official is corrupt; just like not every journalist is corrupt. The insinuation is, therefore, both malicious and unfair.

But Having duly listened to the commentary, let me set the record straight on substantive issues raised as follows:

1. There is no evidence that the film will be shot in South Africa and not Kenya. Ms Mutoko’s sentiments are based on rumours and information that could be incorrect.

2. The producers have not approached KFCB for a filming licence and denied an opportunity to film in the country.

3. Several other international films have been shot on location in Kenya, and the country is considered among countries with the best filming locations in the world. If the filmmakers opt for South Africa, it is not because of prohibitive filming costs in Kenya but unique preferences considered by the producers that have nothing to do with costs.

5. While the claim that the film will be shot in South Africa is yet to be verified, the choice of South Africa (if true) can only be attributed to an individual producer preference of the location, influenced by the nature of his script and the way he wants it to come out. It has nothing to do with the false suggestion that the regulatory environment in Kenya is prohibitive.

6. Granted, South Africa has better film policies and technology. But one of the key challenges we have in Kenya is multiple licences issued by County Governments. Film licensing is a national function and the sole mandate of the Kenya Film Classification Board in line with the Film and Stage Plays Act, CAP 222 of the laws of Kenya.

Yet, some of the County Governments are chasing away film makers by charging illegal fees. We hope to address this matter comprehensively and conclusively through the review of Cap 222 but also the ongoing discussions with the Council of Governors.

Caroline Mutoko was forced to eat the humble pie following Ezekiel Mutua’s explanation, she issued her apology on twitter. 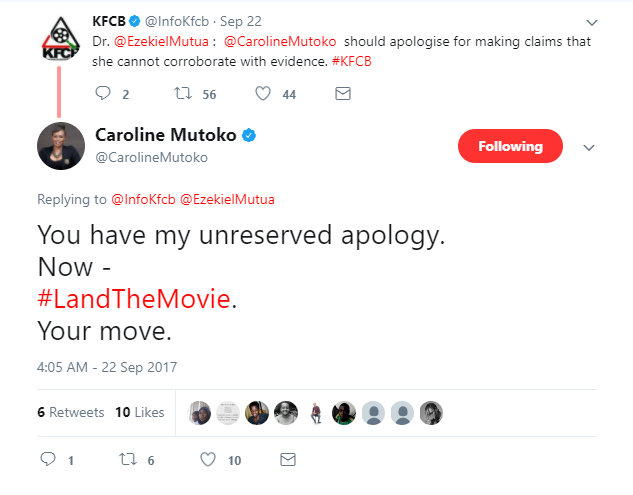