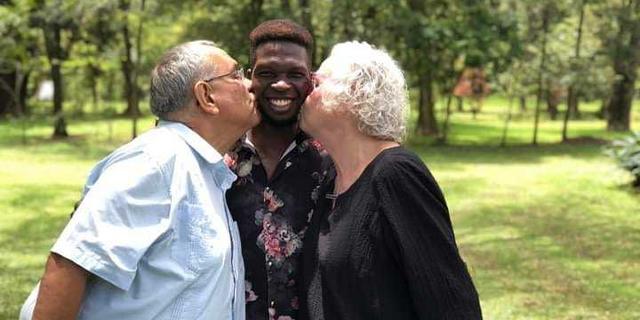 Edwin Chiloba’s death has definitely opened up the colloquy on the queer community on whether it’s right. So many have had their say on the same. For some like Mohammed Ali, it’s against religion and that they should be arrested.

Anyway, apart from that, Edwin Chiloba’s white parents have also been a mystery that not most people know.

How I Met My Parents

The late model calibrated the same in an interview with Ebru TV two years ago. He narrated how, shortly after landing a modelling agency in 2019, he met Peter and Donna Pfaltzgraff.

Chiloba claimed Peter, who was his Facebook follower and loved his sense of fashion, requested him to design shirts for him and Donna.

They invited him over for Christmas, where he spent four days with the Pfaltzgraffs, before telling them his rejection story.

“After Christmas, I was supposed to go back to Eldoret. But then I remembered my story of rejection and the hardships I had been through, and started crying,“ he said.

I remember them crying. They were really touched. They then told me not to worry, that I was their son. They adopted me,” he said.

He was later enrolled at the University of Eldoret, where he pursued a degree in fashion and design.