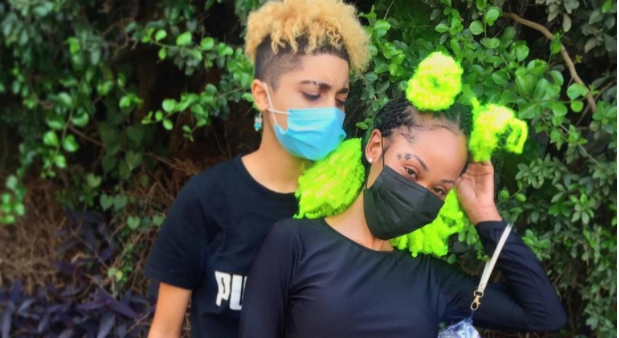 Notiflow’s ex-girlfriend King Alami is currently receiving treatment in Kenyatta National Hospital after she reportedly tried to commit suicide by jumping from 7th floor of the apartment where she resides. According to online reports, the TikToker, who doubles up as Notiflow’s ex-girlfriend, fell into depression after their love story turned sour.

The two were lovers who have been in an on and off relationship after dating for several months; with Notiflow being the one calling the shots. On several occasions, she accused Alami of being a serial cheat- and proceeded to blame her for not cosseting their tumultuous relationship.

In the grand scheme of things, the two have shown how deeply in love they’ve been with each other despite their ups and downs. Evidently from their tattoos with each other’s names.

While the rapper is wishing Alami a quick recovery, she took blame for the damage done; and recently wrote on her Instagram.

”We gon pray for you my baby 😭🙏🏽 We’ve been praying for you day & night . You’re strong my G & you’re still the coolest stud I fell in love with 😎 I love you more everyday Nothing’s changed ❤️ & I’m with you thru it all.. I’m here for you forever my love. Quick recovery my baby you are loved and cherished ❤️

( for those who are blaming me thank you very much for making me feel worse & guilty than I already I’m.
Y’all are right tho, it’s my fault cz if I was with her she’d be OK & safe like she’s always been so crucify me”

And it’s just so alarming what a heartbreak can do to one. But quick recovery to Alami.