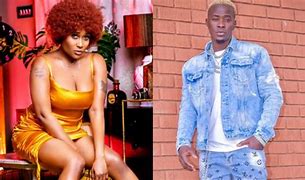 Pozze, who has spent weeks chasing after her, is now celebrating success of winning over the singer.

At first, Pozze confessed that he couldn’t wait to get the sultry Mombasa-based singer under his sheets. This happened after she posted a teasing pic of herself. The 28-year-old Gospel-turned-secular music singer left a thirsty comment under Jovial’s post saying, “Wewe nikupata nakukula na ugali ya ushago aki.”

Later in another post, Pozze changed tact and stepped up his game with an aim to romance Jovial slowly into his hands. “Maybe I should come slowly jaber. If you know me well then you know how much pride I got in me.. so for me to come here and ask you out aaaaaaih. Just say yes.

Jovial is the biggest revelation of our music scene over the last year. The numbers don’t lie, her silky & admirable voice has warmed its way into millions of hearts- accumulating some of the highest views on YouTube with her songs.

After their online scuffles and tussle, the two finally decided it was high time for them to sum things up and accept each other. Recently, the two were spotted getting all cosy together. And led to speculations that they’re an item. Jovial purported that she’s on the verge of getting married to the singer, and claimed that they’re not separating any time soon. Pozze even went ahead to pick up Jovial at the airport with his new matatu. The two are currently lovers and nothing seems to barr them from falling in love.

Watch the short clip below;