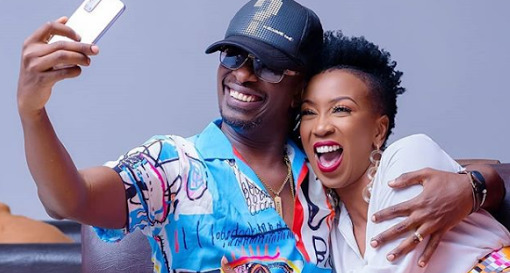 Singer nameless and Wahu have been married for almost 17 years now and their first born daughter, Tumi just turned 16 years the other day meaning…the happy couple didnt waste time in starting a family of their own.

Well, as you already know the two have maintained a clean profile in the media industry for years; and unlike the new age celebrities who prefer entertaining fans with their family issues – Nameless and Wahu have never found themselves in that position.

Away from that, we understand couple is currently expecting their 3rd baby 9 years since they had their second born daughter, Nyakio. Speaking during a recent Facebook live with his Wahu, Nameless revealed although he is jetting back home from his successful US tour, he will not be joining his wife in the delivery room.

According to him, he has done almaot everything to support his wife during the pregnancy journey – but the only thing he wont do is walk into the labor room with her.

I have added some weight and I will go down with you in everything. In labor is where I will not go with you since you like pulling my hair. Second pregnancy, I made sure I was at safe distance.

While Nameless claims his wife pulled his hair back when they were having Tumiso, his wife on the other hand says this was a reflex move from all the pain she was experiencing while her husband was busy on phone.

I am in labor and you are on phone. Do you remember? how does that even happen?

Wahu went on to add that if roles were switched- she’s sure most men woukdnt handle the birthing process; giving an example of her husband Nameless who gets flu and acts like he got hit by a serious illness.

I think most men can’t handle labor if roles can be changed. The number of times I get sick and nobody knows are countless yet on the other side, when Nameless gets the flu, everyone has to know about it.