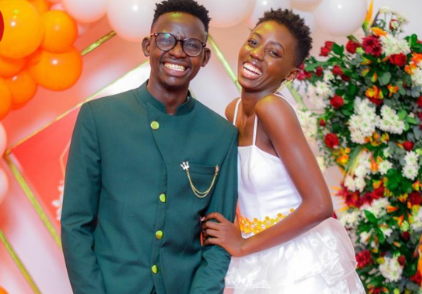 For years, Kenyan comedian MCA Tricky (Francis Munyao) and Akothee’s daughter Rue Baby (Agrrey Dion Okello) have been rumoured to be lovers in denial. Not only have they been besties, but they’ve also been hanging out together for years. Not much recently, but they were often hanging out and flaunting each other on social media.

When questioned about their relationship every time, the two prevaricate their statements and the topic ends up changed. What remains for a fact is they’re not letting go of each other- but they’re also not dating-for now.

MCA Tricky has confirmed that he’s in a romantic relationship with another woman, whom he has been taking suggestive photos with.

The comedian has however, declared his interest in having a baby with Rue Baby, citing that she’s now a ‘big girl’ since she has completed her degree.

Tricky shared the sentiments in a recent interview with SPM Buzz and purported;

He continued to state he doesn’t fear Akothee and it’s not a must for her to accept him to impregnate her;

Akothee had disclosed that it would cost anyone 999 million to break her daughter’s virginity. Do you think Tricky atafika bei?