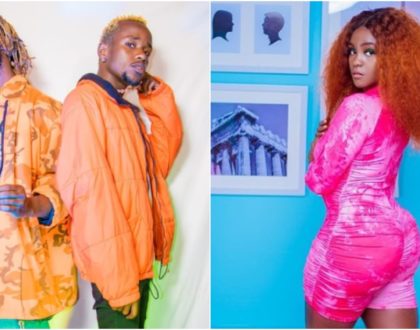 Just recently the upcoming teen socialite took to social media and told the netizens that she owns mansion costing 11million, which was paid for by a mzungu.

Just a few weeks ago, she disgustingly said how traumatized she felt after sleeping in a bedsitter not forgetting that she was hosted there for days.

She did not pay for any bills whatsoever but we all know how the popular Swahili proverb goes, “Asante ya punda ni mateke”. This translates to “A kick is a donkey’s way of saying thank you”.

During an interview hosted by Caroline Mukami, Sheddy Empire, who had opened their doors for her to their home, shed some light about Shakilla’s lifestyle. Apparently, the controversial socialite does not have anyway to stay. To cut the long story short, she is a couch surfer.

The Cheza chini artists confirmed that the 11million mansion that Shakilla was talking about was a lie. “Hata hana mahali pa kukaa. Huyo anakaa kuwa na nyumba ya 11million?” One of them asked and from his facial expressions, I could tell that he was bewildered. One of the questions that kept bombarding my mind is, why would she lie about so many things. Some will say that it is just for clout, others will say that she is just living and enjoying her life but the truth of the matter is that she has gotten herself into so many problems, all in the name of yoloing.

At least we now know that the 19 year old girl does not own any house or have anywhere to stay. As the famous saying goes, ‘you can run with a lie but you can’t hide from the truth. It will catch you!’

Shakilla kicked out of posh Kilimani apartment over rent, socialite back to the streets? (Video)